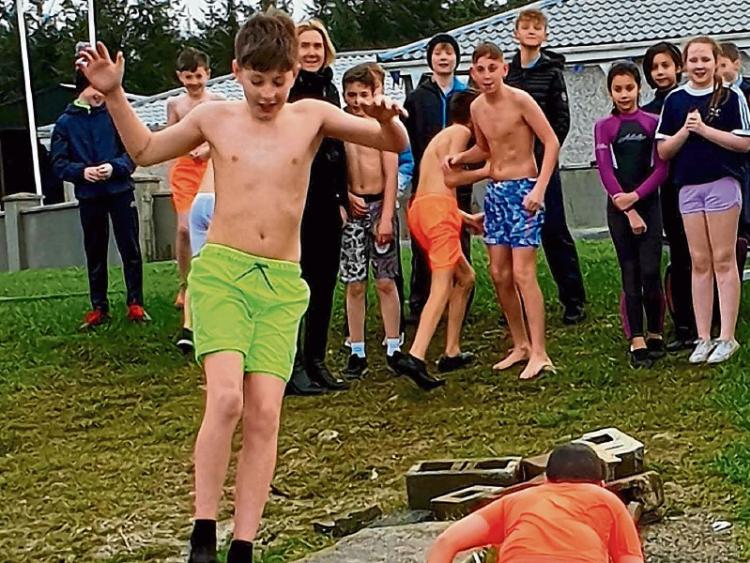 A CASTLECONNELL boy showed the true meaning of Christmas by jumping into the icy cold Shannon to help terminally ill children.

A month ago David Bermingham, aged 11, told his mum, Siobhan, that he wanted to raise money for Share A Dream.

“Two years ago David did the swim on Christmas Day with Lisnagry FC. He raised €600 so he said he wanted to do it again this year for Share A Dream.

“He recruited a few from his class and all the boys and girls have been doing great fundraising,” said the proud mum.

So when Lisnagry NS broke for the holidays, David and his friends headed down to the World’s End.

“What was the water like?” asked this silly reporter.

“It was freezing! It was like pins and needles when you jumped in. I came straight out when I realised how cold it was. After I came out, my friends were jumping in again so I jumped in again!” laughed David.

Up to 10 children braved the Baltic river for the good cause. One was David’s younger brother, Jack, who is eight.

Afterwards there was plenty of towels, hot water bottles, hot chocolate and crisps to get them over the shock.

Their dad, Shane Bermingham, was stationed on a safety boat kindly supplied by Castleconnell Boat Club.

“They were all brilliant. It is a charity close to David’s heart. He has met Shay Kinsella [founder and CEO of Share A Dream] a few times. He is delighted to do it for the kids and is delighted to be able to do it,” said Shane.

It all started from mum Siobhan, an architect, volunteering to work on some projects for Share A Dream including the Dreamland fun centre in Limerick.

“I was telling David that they make the little kids dreams come through,” said Siobhan.

That conversation obviously stuck with the kind-hearted boy and he decided to organise the Christmas swim for the charity off his own bat.

While all the money hasn’t been collected yet, a cheque of over €500 will be presented to Share A Dream in the New Year.

Every cent will go to the charity which moves heaven and earth to make a dream come true for a child who is terminally ill.

While Dreamland is a dream come true for disabled children all over Ireland.

And David is going to continue to support them with another Christmas swim in 2019.

“I’m definitely going to try and do it again next year,” said David.