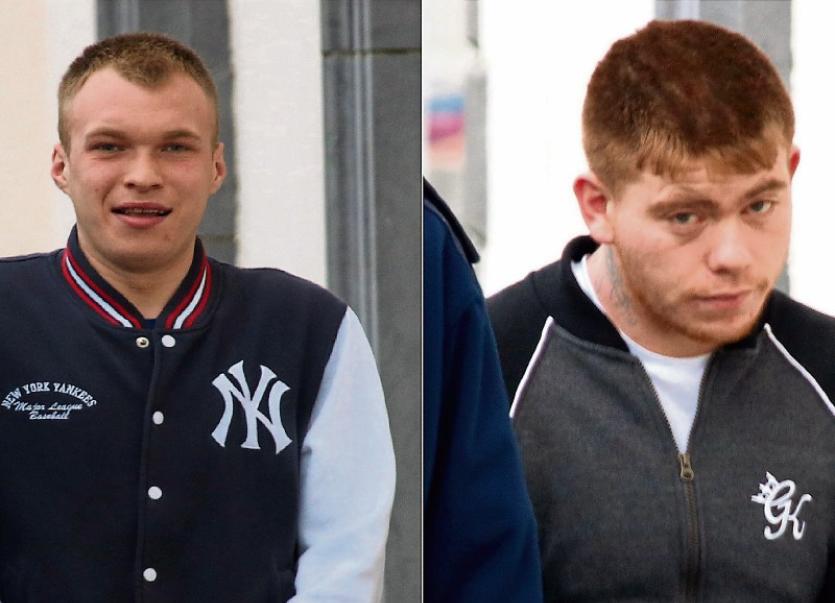 Keith Lillis, left and Stephen Grace, left, were each jailed for three years

TWO young men who became embroiled in the aftermath of a shooting incident in Limerick during which another man was injured have each received lengthy prison sentences.

Keith Lillis, aged 25, of Galvone Road, Kennedy Park and Stephen Grace, aged 26, of no fixed abode had both pleaded guilty to impeding the garda investigation into the shooting which happened at Maple Court, Kennedy Park in Limerick city on July 11, 2017.

Keith Lillis also admitted unlawful possession of a double-barrelled breech loading sawn-off shotgun which was used (by another man) in the shooting.

Detective Garda Barry Moylan told Limerick Circuit Court, gardai were alerted to the shooting at around 3pm – a  short time after the 23-year-old victim presented at University Hospital Limerick having been driven there by a friend.

He said gardai later established the victim – Terry Casey – had arrived at the home of another man at around 2pm in the company of two younger relatives.

Judge Tom O’Donnell was told there was a dispute between Mr Casey and the other man at the time and that shortly after words were exchanged between the pair, three men emerged from a rear gate with one of them discharging a shot directly at Terry Casey.

Having arrived in the area, gardai encountered Keith Lillis who was carrying the shotgun while they were also alerted to Mr Casey’s Suzuki Vitara which had been moved from the scene and set alight by Stephen Grace.

It was accepted by gardai that both Lillis and Grace were “in the wrong place at the wrong time” and that both were subjected to considerable pressure. Neither were involved in the actual shooting.

John O’Sullivan BL, prosecuting, said the case against both men was “not straight forward” and that their admissions and guilty pleas were of enormous value.

“They became embroiled (in the incident), gardai are satisfied they were in the wrong place at the wrong time,” he said adding both had been “smoking weed”.

Judge O’Donnell said it was a concern the incident happened in broad daylight in a busy residential area and that a man was injured.