2018 a great year for Limerick village 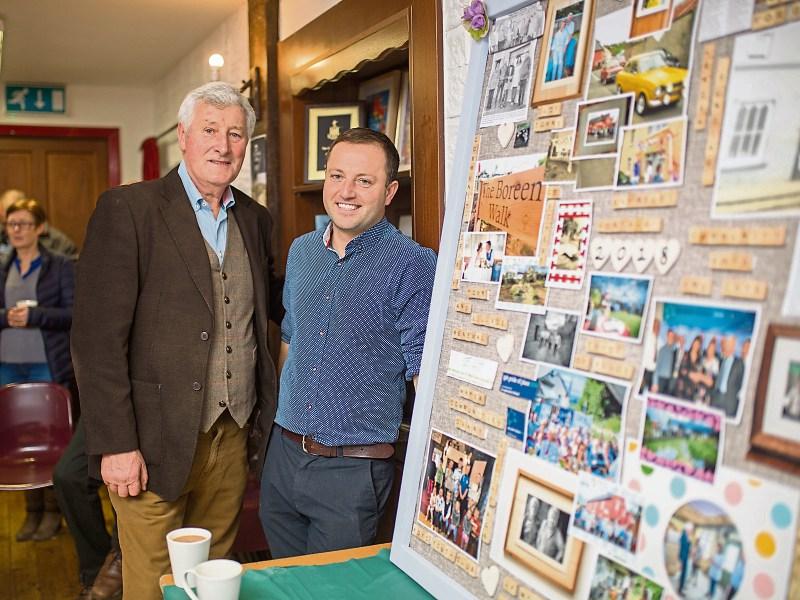 Dan Harrold and Barry Gilbourne, Kilmeedy Development, were pictured at Áras Íde, Kilmeedy, at the launch of plans for the Community Cafe, Kilmeedy

FOR the small, rural community of Kilmeedy, 2018 has been a stand-out year, a year of achievements and of red-letter days.

And to round off an eventful year came the announcement this week that the JP McManus Foundation has awarded Kilmeedy a capital grant to help them complete their ambitious project to open a community shop and cafe in the heart of the village.

“It has been a great year for Kilmeedy,” Seamus Murphy, the chairman of the Kilmeedy Development Association said at a special reception held to mark and celebrate their success.

But 20 years ago, Kilmeedy was on the decline, local shops and pubs were closing and no new families were settling in the area. The Development Association was set up in a bid to address these and other issues and since then has opened a community centre in Aras Ide, helped set up training courses in health and horticulture bringing dozens of students into the village each day, established a community garden and supported the transformation of the old barracks into a multi-generational garden, resource centre and creche. They also spearheaded voluntary housing the area.

But 2018 was proof, if proof were needed, that the association is determined to keep up their aim of regenerating their community.

The year got off to a good start when work began on transforming the former post office into a community shop and cafe which will operate as a much needed service in a village currently without a shop and provide an outlet for local produce as well as providing meals for locals, students and visitors. It will also provide a commercial kitchen space for small producers allowing them to expand. In tandem with the already established Community Garden, the aim,”Mr Murphy said, is to grow and produce as much food as possible locally. “We want to have it as close to home as possible. That is the whole ethos,” he said. Long-term, he added, they hoped to develop a Feenagh/Kilmeedy Food Brand.

Funding of €115,000 from West Limerick Resources and of €100,000 under the Town and Village Renewal Scheme, and topped up with the McManus Fund, have seen this project move from dream to near-reality. It will, Mr Murphy said this week, be open for business next year and he thanked all three organisations for their support and help.

He described the McManus Fund as “fantastic” and spoke of the good working relationship Kilmeedy has had with West Limerick Resources and Limerick City and County Council over the past 20 years. “They have helped us make Kilmeedy a better place,” Mr Murphy said.

Kilmeedy also won the prestigious Limerick in Bloom competition in 2018, Mr Murphy pointed out, along with securing increased marks in the Tidy Towns competition. It was, he told the gathering, the culmination of 20 years of hard work by the local committee.

“Twenty years ago, we got a Community Employment scheme and that was probably the single most important thing to us. Without the CE, we would not have achieved what we have achieved and we wouldn’t be able to maintain it. ,” Mr Murphy said. “It is one thing to have vision. It is another to maintain that.”

Another big achievement for Kilmeedy in 2018 was to be runner-up in its category in the Pride of Place competition. Judging, which took place on a sunny day in July, brought out every group in the community in support and culminated in a big ceremony in Cork in October. “It was a tremendous honour to represent the county,” Mr Murphy said.