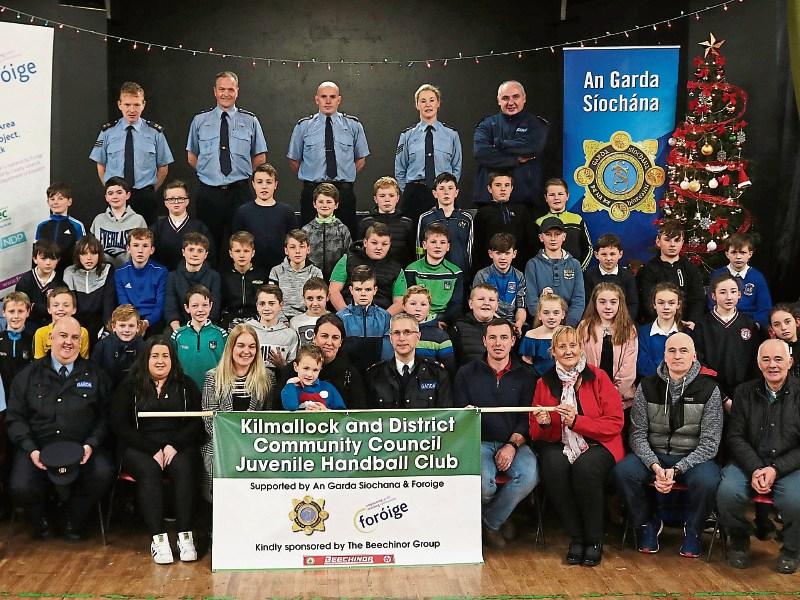 OVER 50 youngsters in Kilmallock are having a ball every week thanks to a local garda.

Garda Robert Young noticed during the summer that dozens of children were playing handball against walls in housing estates.

Having grown up beside a ball alley in Castlemahon and played the sport as a boy, he decided to give them a helping hand.

Garda Young approached Kilmallock Community Council and they jumped at the idea. Kilmallock GAA kindly gave access to their courts and Foroige also came on board.

“It just exploded from there. After the first night we had to stop it for a week because the numbers had gotten so big. There are 52 signed up - boys and girls. They are aged from 10 to 16. They play ever Thursday in the GAA grounds between 4pm and 6pm. It is a real team effort,” said Garda Young, who is joined on the committee by Anita O’Brien, Niamh Dowling, Pat Lynch, of Kilmallock Community Council, and Pamela Noonan of Foroige.

Garda Young said the players are so keen that they are waiting for him when he arrives on Thursday afternoons with the keys.

“They are very good. It is going great. They love it. They even drew up their own rules and they stick to them. We can chat and have the craic and it is nice that they don’t just see me as a garda now,” said  Garda  Young, who has been supported by his colleagues in the town, Sergeant Damien Holian and Garda Marie Armstrong, Garda John Curtin and his superintendent in Bruff, Brian Sugrue.

What started as a garda, Kilmallock Community Council, Kilmallock GAA Club project has grown out of all proportion in a short space of time. Foroige, Ballyhoura Development, Tusla, James and Leila Beechinor, clergy, Scoil Mocheallog and teacher John English, John Penny, County Handball secretary, Limerick City and County Council and even Croke Park have lent their support. They ended the year on a high with a medal and prize giving ceremony in the People’s Hall on Thursday.

Bruff Superintendent Brian Sugrue presented the medals and praised the youths on their sporting endeavours.

“The new handball club has been exceptionally well received and very well attended. All the young people participating should be complimented for their engagement and their interest. A lot of different agencies are working together - it has been a great success,” said Supt Sugrue, who described Garda Young’s initiative as an “excellent example of gardai working in and with the community”.

“He deserves a lot of credit. It wouldn’t have happened without  Garda  Young. It breaks down any barriers that may exist between young people and gardai which is always helpful in building community relations. That’s what we want as part of community policing and community engagement,” said Supt Sugrue.

Anita O’Brien, Kilmallock Community Council, said all the players have shown great potential and they have enjoyed working with them each week. Every one of the 52 boys and girls received a garda medal for participation and a Selection Box courtesy of the Beechinors, who also sponsored goodie bags full of handball gear for special award winners.

“We will be back again on January 17. We would like to thank everyone for coming to our awards evening - parents/guardians, Foroige, Ballyhoura Development, Tusla, the Beechionors, clergy, Scoil Mocheallog, John Penny, County Handball Secretary, Supt Brian Sugrue and local gardai,” said Ms O’Brien.