‘It will change his life’: A very special room for Christmas for County Limerick boy 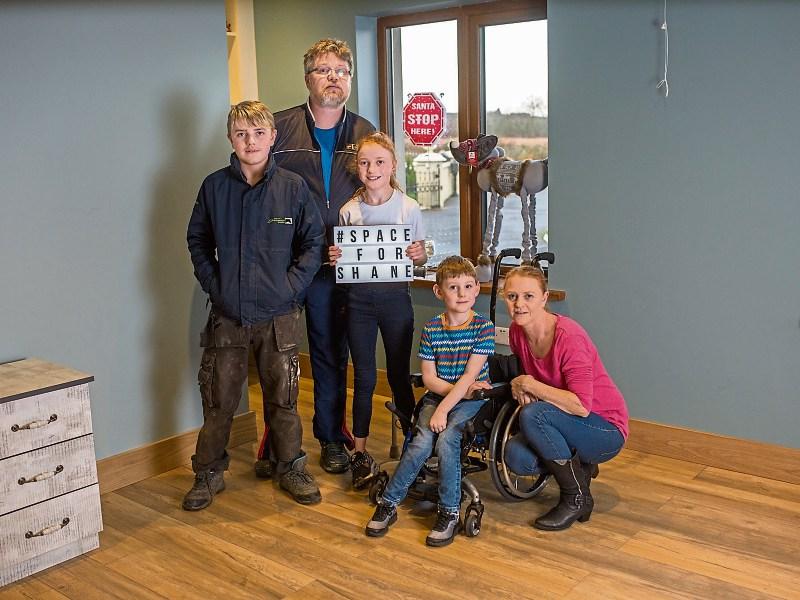 Shane, 5, with his parents Shane and Caroline, his brother Aaron and sister Kaliyah in his new bedroom suite

“HOW many more families are there like us?” Caroline Enright asks as the hardest year of their family’s life draws to a close.

Happily for the Athea family, it has ended on a positive note. At last, after almost three years of pushing and lobbying, Shane has got his own room which is big enough to hold the special bed and other equipment he needs, big enough to turn a wheelchair in and, crucially,  comes with his own specially adapted wet-room.

But getting to this point has been hard, physically and emotionally.

Since last May, Richard, who relies on crutches and has lost the use of one leg, has had multiple surgeries while Caroline has also had to cope with a medical condition and arthritis which makes lifting and moving Shane difficult.  And Shane too has had his share of illness.

In addition, there has been the ongoing negotiations with Limerick City and County Council, to get approval for their plan and to get the grant increased.

But the decision to go public and ultimately to rely on the kindness of strangers was, in many respects, the hardest thing they have had to do and to endure as a family.

“Your whole life story is out there,” Richard says.

“You are very very vulnerable,”Caroline explains.

Alongside  the kindness and generosity of the great many people who helped them achieve their aim of  a special room for Shane, there were also the unkind comments, the silent phone-calls and a sense of being judged.

And they had to overcome their own feeling of of having fallen short, of not having been able to provide from themselves for the little boy who had fought so hard to survive from the day he was born, 15 weeks premature and weighing just 845 grammes, in August 2013.

Shane spent the first 70 days in an incubator, and a scan at six weeks revealed a grade four brain bleed  and the neurological part of Shane’s brain covered with cysts. “They said Shane would lie in a bed, he would have no emotion, wouldn’t breathe on his own, he would never know us. And there was nothing they could do,” Richard explains.

At eight weeks, the diagnosis of spastic diaplegia cerebal palsy came. But Shane held on. And so did his family. And eventually they brought him home.

The struggle to adapt their home to accommodate Shane’s special needs has stretched well over two years but finally, the grant was upped to €30,000 and work began last August.

But without the fundraising, the bucket collections, the special events, the bag-packing and the online funding,..the adaptation would not have been possible. Volunteers prepared the base to ground level. Others offered services for free. Still others provided materials free or at reduced rates.

A huge benefit was that many people obliged them on timing and many were and are prepared to wait for their money until the grant comes through.  That won’t happen until the local authority signs off on the building and that has yet to take place, Richard explains.

They will also have to wait a bit longer for certain special equipment to arrive: a specialised bed and crucially, a hoist to get Shane into and out of bed. But when they arrive, Richard explains, he will be better able to take on the care of Shane. Until then, however, Caroline is the only one who can do the heavy lifting.

But for all that it has been a tough year, there is relief and consolation that their dream for Shane has been achieved.

“This is Shane’s lifetime pad,” says Richard, leaving unspoken, how long that lifetime may be. But he is determined to keep on campaigning to ensure that other families don’t have to go through what they did. And he is feels ‘let down’ that local TDs have not raised the issue of removing the means test for house adaptations for people with disability.

Meanwhile, Shane has started “big school” at Courtenay Boys NS where he has begun to settle in well, despite absences through illness.

“He loves his teachers,” Caroline says.  And the school has developed a fantastic programme for him.  But up to now, she points out with sadness, Shane’s life has been about machines, not toys. Hopefully, now, a new chapter is opening up for Shane and for his family.