Joy in Limerick village as building gets underway for little Shane 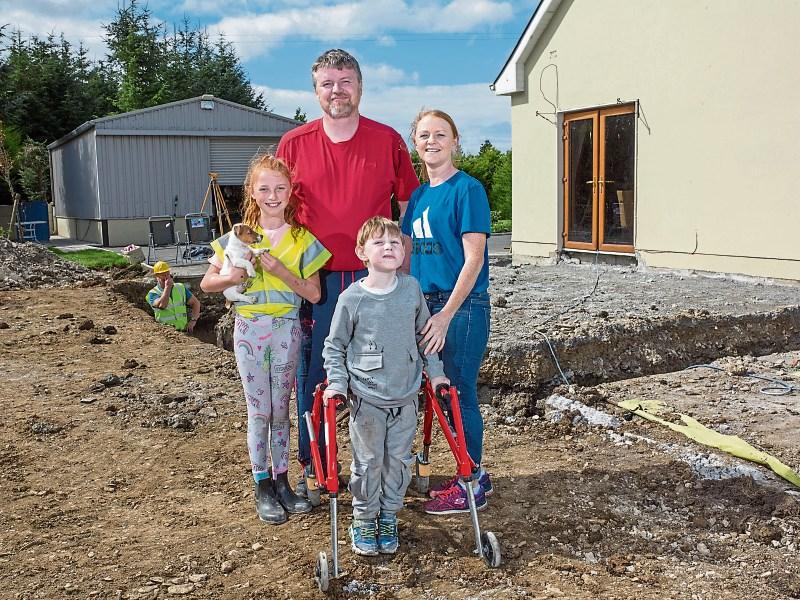 Kaliyah, Richard, Shane and Caroline Enright were pictured with Levi the dog outside the new extension to their house in Athea | Picture: Marie Keating

TUESDAY was a red-letter day for the Enright family in Athea  as builders moved in to begin adapting their home for Shane who will be five years old next week and who has cerebral palsy.

It also marked the end of the family’s long-running struggle to overcome various obstacles and make it all possible.

“It is all excitement here. The story is getting more positive. ” Richard Enright said as equipment and builders began moving in to their hillside home. But he added: “It is a relief.”

Last May, the plight facing Richard and his wife Caroline was highlighted in the Limerick Leader.

The couple were then almost at breaking-point, facing a huge bill of up to €80,000 to adapt their home but with only the promise of €15,400 by way of a government grant.

Their efforts to get a top-up or extension on their mortgage to make up the difference had also been turned down by various banks.

“We are losing the fight,” Richard said at the time. “We  have been fighting with the HSE, with the council, with the Minister for Disability, not to penalise us for having a wage.”

Every day that passed without the necessary house adaptations was bringing additional hardship.

Shane, who almost didn’t survive as a new-born premature baby,  now weighed over 25kg and was still growing, making it more and more difficult for Richard and Caroline to manage.

Caroline is slight and suffers from arthritis and other medical conditions.

“He is getting so big, so fast, we can’t lift him. So what are we going to do?  Jack and Jill help, but that is just eight hours a week and that will end in August,” she explained.

Richard, who also suffers from arthritis, was at that point facing into a number of surgical procedures.

The proposed adaptation was to include a double-sized bedroom, as Caroline has to sleep in the same room as Shane who frequently falls out of bed. It would also include a wet room and storeroom for the equipment Shane uses.

Crucially  it would provide the space needed for him to walk safely using a special frame as he also has absence seizures and no pain threshold awareness.

But happily  things changed and for the better. The adaptation grant from Limerick City and County Council was increased to €30,000, a number of generous suppliers came on board with help,  the plans were modified and the final cost reduced to a more manageable level.

There was still a gap however, a gap that the kindness of strangers has helped and is helping to fill.

An online fund-it campaign, a number of local fund-raisers and a bucket collection last weekend have helped reduce the Enrights’ bill.

And Richard and Caroline are deeply grateful for the support they have received which is life-changing.

“For myself and Caroline, today is a very positive day,” Richard said this week.

“There is enough negativity around. Now we need to show people what families can do, what friends can do, what people can do when they get together and change a child’s life, a family’s life.”