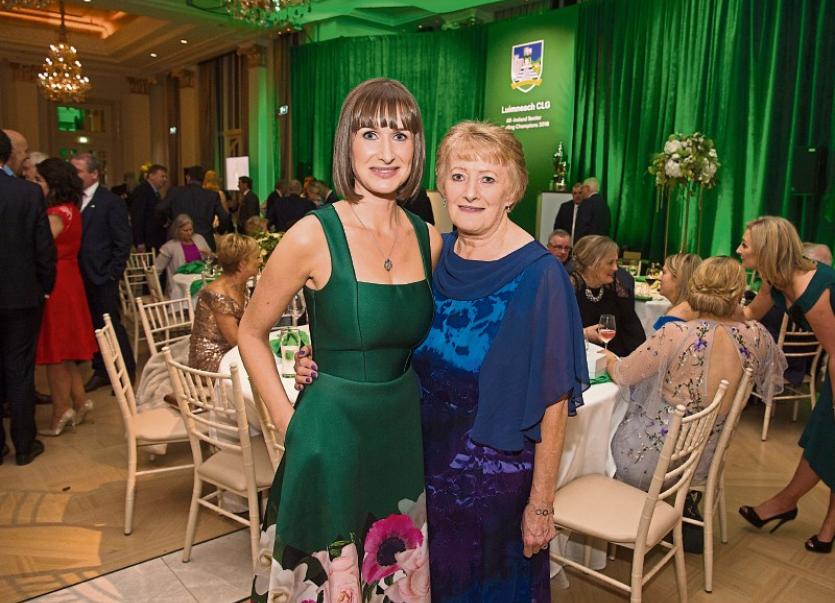 THE glamour and glitz on show in Adare Manor on Sunday night would put Hollywood to shame.

And one person who got plenty of compliments for her green Limerick-themed dress was compere for the night, RTE’s Petula Martyn, the former Limerick Leader journalist now based in Dublin.

JP McManus was full of praise for Petula, who had to step in at the last moment to host the event, when Joe Nash of Limerick’s Live 95FM was sadly unable to attend following the death of his mother, Pat.

Petula from Corbally originally, was working on a documentary for RTE on the All-Ireland win when she got the call to do MC for the night.

“I was so busy working on the documentary I had no time to go shopping and so I ordered two dresses online in the hope one would fit and look well,” she explained.

“The two dresses arrived on Friday,” she added.

Petula brought her mother Pauline, from Raheenagh, to the event and she “had the time of her life”.

“To be there and play a small part was great,” she said. “The room was spectacular, the floral arrangements, the music and entertainment - it was a real fun, relaxed, enjoyable night.”

It sure was with music from the Minella Strings, and later Spring Break played in the main ballroom. Kathy Nugent also entertained and got many of the crowd including Noreen McManus, Walter Shanahan, Sean Lynch and others to sing along during the splendid meal. A huge amount of organisation went into the night with County Board chairman John Cregan praising the role of Paul Foley from the JP McManus organisation and the team in Adare Manor headed by CEO Colm Hannon and led by Anita Higgins and Paul Heery.

The documentary on RTE Radio One is an hour long and is called Limerick Pure Proud. It goes out on Sunday, December 30, at 4pm. Don’t miss it.