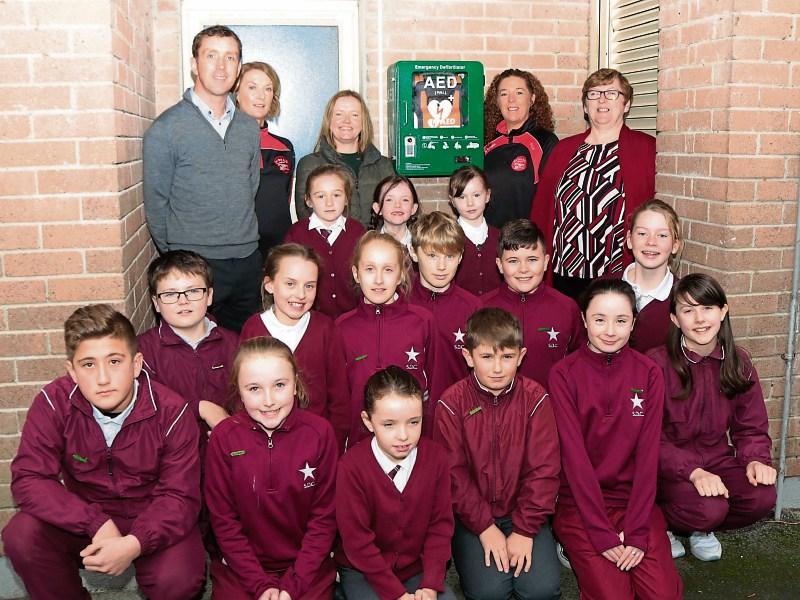 Members of An Bru AC, teachers and pupils of Scoil Dean Cussen in Bruff with the newly erected defibrillator that was bought by An Bru for the whole community Picture: Michael Cowhey

THE IMPORTANCE of having a defibrillator is sadly fresh in everyone’s mind in Bruff.

Mike Carmody, chairperson of An Bru AC, said they purchased the equipment in 2016 and it was called in to use in May. A young man tragically lost his life in Bruff.

“At the time our defibrillator was on the premises of club member and local pharmacist, David Wallace. David used the defibrillator and performed CPR in order to try to revive the man. Unfortunately these attempts were unsuccessful.

“However, by having a defibrillator on hand the young man was given every opportunity to survive. Sometimes it is only in such tragic circumstances that the importance of such potentially life saving equipment can be fully understood and appreciated,” said Mike.

As the club did not have a permanent place to store the defibrillator the club committee actively began to seek out a home for it at the beginning of the year.

“We approached the local national school in Bruff about housing the defibrillator within the school grounds. They kindly agreed to a move that would be to the benefit of the entire community. We purchased an external box at the cost of €686, in addition to purchasing new pads and having our defibrillator serviced, as required after any such incident.

“As a small local club such costs occupy a significant part of our annual budget. However, cost is always secondary when discussing such priceless pieces of equipment. A local electrician, James Keenahan, very kindly offered his services to install the box and link it up to the school’s power source. All in An Bru would like to wholeheartedly thank James for his generosity,” said Mike.

He hopes that they will never have to use the defibrillator again.

“However, by finally locating a suitable home, it is now there in case it should ever be required by anybody within the community again,” he said.

In more recent times, they established the juvenile section of the club, which caters for children between six and 17. Their juvenile cohort now numbers 50 and is continuously increasing.

In 2016, they purchased a defibrillator from club funds with the help of a €200 grant from Limerick Sports Partnership. It is now permanently located in Scoil Dean Cussen for the whole community.