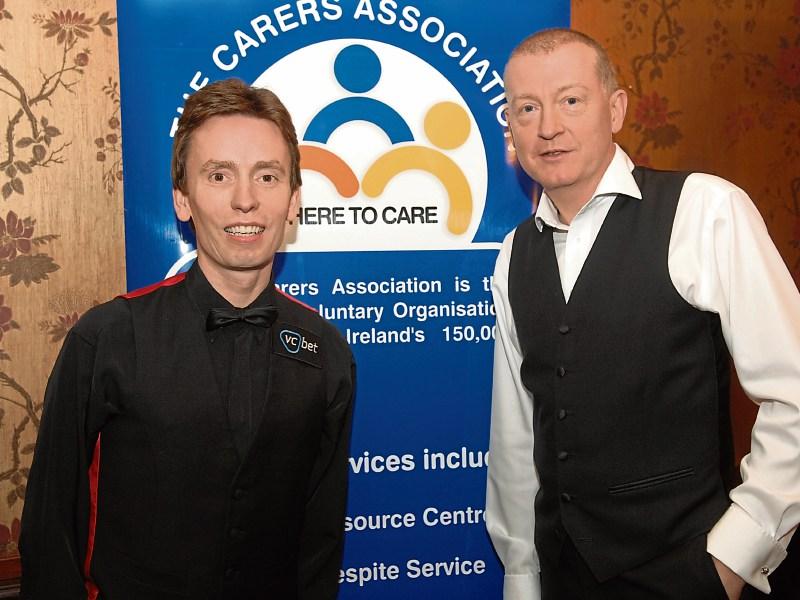 SNOOKER greats Steve Davis and Ken Doherty will visit Newcastle West next month in what is being billed as the snooker spectacular of the year in Limerick.

And auctioneer and community activist Pat O’Donovan is the man bringing these world renowned and household names to the county town.

“I was at a snooker exhibition where the two of them Steve Davis and Ken Doherty were playing down in Cobh earlier this year,” Mr O’Donovan said. “It was most enjoyable and I thought it was a superb night’s entertainment. Steve Davis was doing trick shots and telling jokes right up to midnight.”

He approached the two men afterwards and through their agents has now secured both players for January 10, 2019, exactly one year to the day after seeing them in action in Cobh.

Tickets have now gone on sale for the event which will take place in the Longcourt House Hotel on January 10 and is a fundraiser for Friends of St Ita’s and West Limerick Community Radio.

“It was a sell-out in Cobh and we would be hoping for the same here in Newcastle West,” Mr O’Donovan said.

There is a limited number of VIP tickets available at €50, Mr O’Donovan added. VIPs will get a chance to meet Steve Davis and Ken Doherty in a special meet and greet reception beginning at 6.30pm and they will also get top seats close to the action. Other tickets cost €20 for a show that will begin at 8pm.

“We will have a special snooker table with lights brought in from Wicklow for the evening,” Mr O’Donovan added. The show will include a play-off between Davis and Doherty but they will also play other guests on the night.

In addition, there will be special auction slots on the night where the top bidders will get their chance against the former world champions. But the sellers of 20 or more tickets will also be in with a chance to take on the snooker greats at their own game.

“This will give opportunities to local people,” Mr O’Donovan said. Snooker cues, signed by the two men, will also be up for auction.

“It should be a great and exciting night.

“The two men joke with one another, with other guests and with the audience and there is great banter between them,” Mr O’Donovan enthused.

But the bottom line is that it will help raise funds to improve life for patients in St Ita’s Hospital and also put West Limerick 102 FM in a healthy financial position going into 2019.

The Newcastle West event will take place against the background of Ken Doherty losing by just one frame to Ronnie O’Sullivan in the second round of the UK Snooker Championship.

O’Sullivan went on to make history by winning his seventh UK title and 19th major and breaking Steve Davis’ record in the process.

It also comes in the context of controversy over remarks in an interview between the now-retired Davis and O’Sullivan.