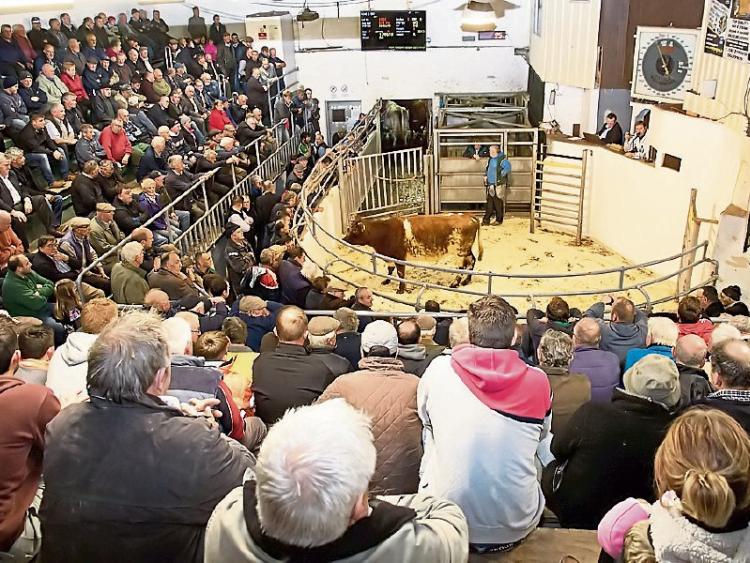 IT WAS a major change for Kilmallock Mart to even consider having a sale other than a Monday.

Monday has been the main day in the mart since it opened in 1958. However, it is true that every challenge presents an opportunity, says PJ Buckley, chief executive, GVM Group.

“There are challenges facing Kilmallock and all other marts in order to keep pace with the changes taking place in the wider environment in which marts operate.

There are substantially fewer numbers farming nowadays, there are a lot more part-time farmers, farmers have less time and the whole movement of livestock has changed and continues to change. There is the constant challenge in marts to keep pace with regulatory requirements and this year in particular, the whole area of health and safety has come to the fore,” said Mr Buckley.

It was these increased demands in relation to health and safety, together with rising insurance costs that forced Kilmallock Mart to explore how it could better ensure, as far as possible, the safety of users of the mart. The ability to get suitably qualified and experienced staff was also an issue.

“The society has invested substantially in the last few years in improving facilities and extending the mart. The society did consider further expansion of facilities but in the end decided ultimately to split the sale for the busy period and run a second sale,” said Mr Buckley.

They decided to run a Tuesday evening sale for weanlings, runners and sucklers from October 9. It ran for nine weeks until December 4.  It was a very brave move but thankfully proved to be an outstanding success.

From the very first evening when crowds flocked in ‘just to have a look’, it has continued every week with packed rings and plenty of stock available.  From the mart’s point of view, in relation to the categories of stock sold at the sale, numbers are up 15% on 2017 figures.

“The extra space has made it very comfortable and safe for both people and animals. Sales have been run very efficiently and animals are penned for all buyers. The volume of people attending the sales has also been very noticeable, particularly with a number of family members attending.

“One person commented that it has become a social occasion, an opportunity for people to get out of the house and chat with neighbours – even to get together and dare we say it, perhaps call for a ‘drink’ or a ‘cup of tea’ afterwards. Obviously, the other big plus from the Tuesday evening sales has been that Monday is now a much more comfortable, easier and safer day for everybody in the mart,” said Mr Buckley.

Such has been the success of the Tuesday evening sale that the committee has decided to go with it again for the busy period in the spring for weanlings.

They expect to commence in early / mid-March and run it to mid / late May.

Furthermore, emboldened by the success of the Tuesday evening sale, they have also decided to “push the boat out even further” and intend to hold a Wednesday evening calf sale for the busy period.

They plan to commence this sale in February and possibly run it to late April. This will be in addition to the normal Monday sale for calves but the committee see it as an additional opportunity for farmers to sell calves in the mart, particularly those who find it difficult to make the Monday sales.

They also see it as helping to give buyers further opportunities to purchase stock.

The committee are certainly in the mood for change. One further change that they are making is that from January 1, 2019, they intend to scrap the entry booking system for bullocks and heifers and replace it with the system of sellers getting numbers for animals when they arrive to the mart.   They say the main issues with the booking systems were the significant numbers of stock being booked in and not coming and also stock arriving very late for sales.

“It posed issues from a health and safety point of view with animals coming in when other animals were going out and it also meant that large numbers of pens in the mart were either empty or only partly full on Mondays,” said Mr Buckley.

They note that marts in many parts of the country, for health and safety reasons are now imposing restrictions on time for stock to be in the yard so as to allow buyers view stock before sale and say that Kilmallock Mart may have to do this.

The mart also say that they want to ensure better utilisation of staff, particularly in picking cattle for buyers.

They accept and understand that this change may not please everyone but they say it really ties in with all of the other changes being made.

They don’t envisage any major queues for stock intake, they note that for the busy periods, weanlings will no longer be sold on Mondays and that they will also have additional chutes available to take in dry cows.

The mart is also trying to encourage more sellers to change to Electronic Funds Transfer (EFT) for livestock rather than receive payment by cheque.

At present, around 30% of sellers are signed up for EFT.

The EFT payment will be in the seller’s account on the Friday after sale. People signed up for EFT will receive an email of their statement. If they do not have an email address, they can collect the statement at the mart. Under this new arrangement therefore, the EFT payment is much faster.

The society notes that this has been a very difficult and challenging year for farmers and says this has been reflected in all marts including GVM marts.

“The very bad and late spring followed by the drought in the summer has severely impacted on numbers.  However, we look forward hopefully to a better year for everyone next year and want to take this opportunity to thank everyone for their support and to wish everyone a happy and peaceful Christmas and a healthy and prosperous new year,” concluded Mr Buckley.