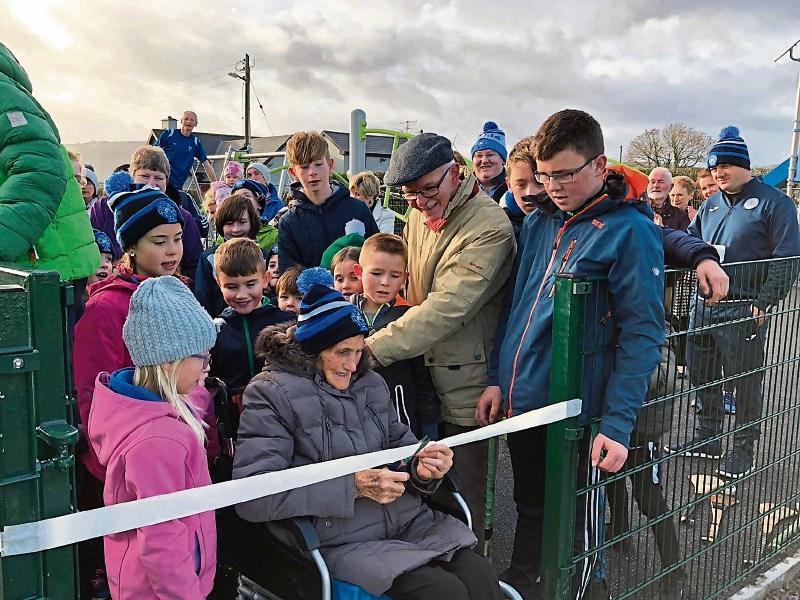 Kathleen Moloney, Killeedy’s most senior citizen, cuts the ribbon on the children’s playground in Raheenagh

IT was yet another red letter day for Killeedy on Sunday as more strands of the master-plan for regeneration and development in the parish took physical shape.

At the Raheenagh end of the parish, a lovely new playground was officially opened while in Ashford a new woodland trail,  which adds to and complements the existing Broadford Ashford Walking Trails, welcomed its first batch of walkers.

The two developments fit snugly into a wider plan which will see the parish build on its strengths as a centre for healthy, outdoor activity and a good, eco-friendly place to live.

Meanwhile, the news that a grant of €169,000 has been approved to develop the old Ashford Tavern into a Tigh Cheooil, a youth centre and a hub for walkers and cyclists has come as an advance Christmas present for the parish. “It seems like Christmas has come early in Killeedy,” Jack O’Connor of the Kantoher Development Association said.  The news means the project can now go to tender and they hope to begin work in the early summer of 2019.

Another major project in the parish, the Killeedy Eco-Park, which involves  developing a reed-bed sewerage system and which began earlier this year, is now well advanced. The old Kantoher ponds have been cleared and set with reeds and a system of walkways developed around them, Mr O’Connor explained. In the next phase they hope to connect up the Kantoher Business Park which is now home to six companies and up to 80 workers, while further phases will connect the villages of Raheenagh and Ashford.  The plan also includes developing a water-sports area and a wildlife walk.

On Sunday however, the excitement centred on the new playground which almost magically took shape over the past three weeks. Located across the road from Raheenagh national school, the playground emerged from a collaboration between Killeedy GAA and Limerick City and County Council and is part of a masterplan by the GAA to provide health-giving facilities to all generations in the parish.

This plan has already seen a new wall-ball put in place, adding to the handball and squash court facilities already on the campus. A  floodlit walking/jogging track is being developed around the two state-of-the-art GAA pitches the development of a high-performance gym is also part of the overall plan.

Cutting the ribbon for the playground on Sunday was Kathleen Moloney, the parish’s most senior citizen while Minister of State Patrick O’Donovan and Deputy Mayor Michael Collins presided over the designation of the campus as a smoke-free zone.

Meanwhile, at the trailhead in Ashford, Kathleen Barry of the Broadford Ashford Trails Group, set up to 70 men, women and children on their way for the group’s annual Christmas Charity Walk in aid of Milford Care Centre. But it was also the baptising of the latest addition to the trails, a 1.3km woodland loop  which will also make access easier and safer to some of the longer trails.

The woodland loop was developed through funding from the Outdoor Recreational Infrastructure Scheme 2018 and GMA funding and follows the line of the old cob road,  from the uplands down to the village, and which had virtually disappeared as a result of forest planting. It offers a short but tranquil off-road walk but also offers less steep access to the more demanding Gortnaclohy Loop, the Loch Ghé trail and the Ashford-to-Broadford trail.