County Limerick school’s turkeys are ready for the Leaving 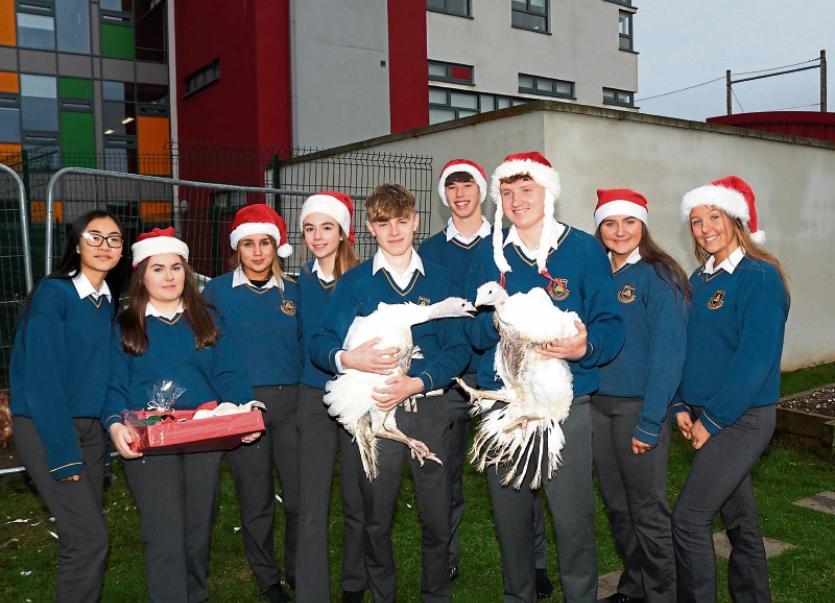 THE TURKEYS in the photo with Scoil na Trionoide Naofa students in Doon look decidedly nervous - and who could blame them!

Seven turkeys have been expertly reared by transition year teenagers on the school farm. Five of the seven will be up for sale at a Christmas fair on the school grounds from 2pm to 5pm this Sunday, December 16. The other two are being given to the local day centre for their service users’ Christmas dinner.

“The whole day is about bringing the community together and letting them see the school, the farm and all that is happening. Many of these stalls are from outside traders while others are from our students who are involved in TY mini companies. Tractor Ted and Santa will be here with a horse drawn carriage taking families to Santa's grotto.

“Kids can then enjoy a Christmas themed disco to burn off all their energy. For the older ones we have the immensely popular hang tough competition, striking through hoops and lots more,” said James.

The school’s farm is the brainchild of principal, Eilis Casey, back in 2016. She had the perfect man for the job - James, who is a part-time farmer.

“Our farm has expanded this year as our donkey had a foal in June called Storm. We now have three donkeys. We have also added four Friesian heifer calves to the herd. These were bucket reared by last year’s transition year students and are being fed nuts by this years ones.

“Our two heifers from last year are in calf and we hope to have one of their calves on display if it arrives in time. We have seven turkeys being fed for their big day on December 25. Every week two different kids go out and feed the turkeys every day, clean them out, give them water and bed them.

“A new addition also this year are the 12 chickens and their two new coops that are supplying the school with free range eggs. We will have a special marquee on Sunday where the animals can be viewed,” said James, who adds that students have accepted their turkeys’ fate.  All funds raised from the raffle, consisting of lots of hampers and a signed Limerick jersey, will go back into the farm. Christmas festivities start on Friday night at 8pm in Doon church with a free concert by the school’s choir and school of music.