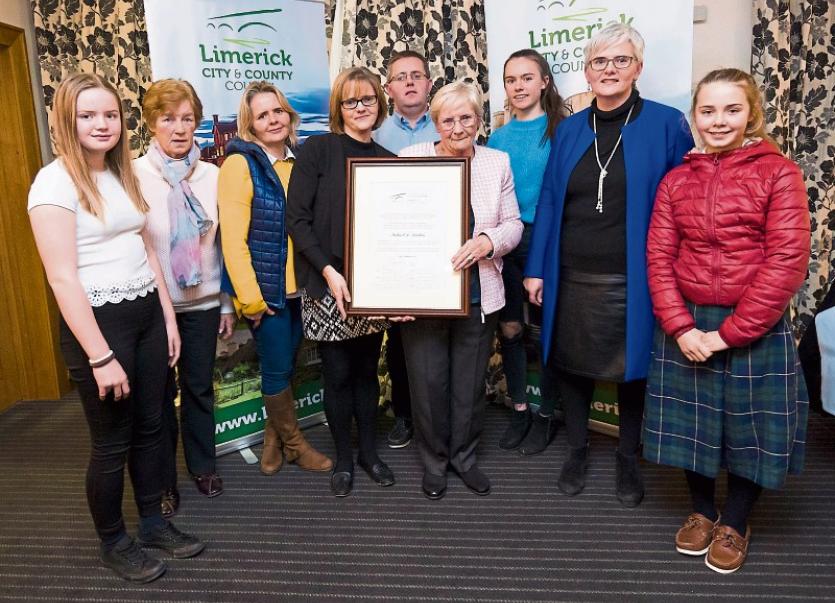 A CHANCE conversation between Limerick councillors turned into a “sad but beautiful evening”.

For the first time, the Cappamore-Kilmallock municipal district honoured those who have gone before us with a moving ceremony.

“It was sad but beautiful. The families were really moved by it – you could feel it in the room,” said Cllr Eddie Ryan, cathaoirleach.

“It was civic reception which is the highest honour we can bestow. Honorary scrolls were presented,” he continued.

“The idea originally came from Cllr Michael Sheahan who mentioned to Cllr Ger Mitchell. Ger said it to me, I took it and ran with it with the support of my fellow members,” said Cllr Ryan, who thanked historian Tom Toomey for writing and reading the memorial citations.

Trooper Patrick Mullins, Kilbehenny, enlisted as an army recruit in Cork in 1960. His role was an armoured car gunner in a four man crew.

In June 1961, Patrick left for the Congo with the 35th Battalion. On September 14, Patrick’s armoured car was the lead vehicle in a UN convoy travelling to relieve other Irish troops at a post in the city when it took a direct hit from an anti-tank round. The vehicle was badly damaged but two of the crew escaped.

The car was still functional and Patrick and Corporal Michael Nolan, who stayed with the vehicle, somehow managed to restart and drive it but they were attacked again. The two young men fought heroically before they were eventually overwhelmed. They put up a ferocious battle.

When the armoured car was recovered the next day there was no trace of the two soldiers. Corporal Nolan's remains were later found in a graveyard and repatriated but the remains of Trooper Patrick Mullins were never found. He was only 19.

The second man honoured was Corkman Michael Quinlan, a former teacher in Patrickswell, Lough Gur. Cork’s loss was Limerick’s gain as he educated countless children. His love of history inspired him to do a course in archaeology. Michael’s writings of Lough Gur helped put it on the map.

The third person celebrated was Ballyneety’s and the Limerick Leader’s Harry Greensmyth. A great GAA player became a great GAA trainer and GAA writer. Penning history books was another forte and he was one of the Leader’s longest serving notes correspondents. Over 60 years Harry made an outstanding contribution to the sporting and historical life of east Limerick.