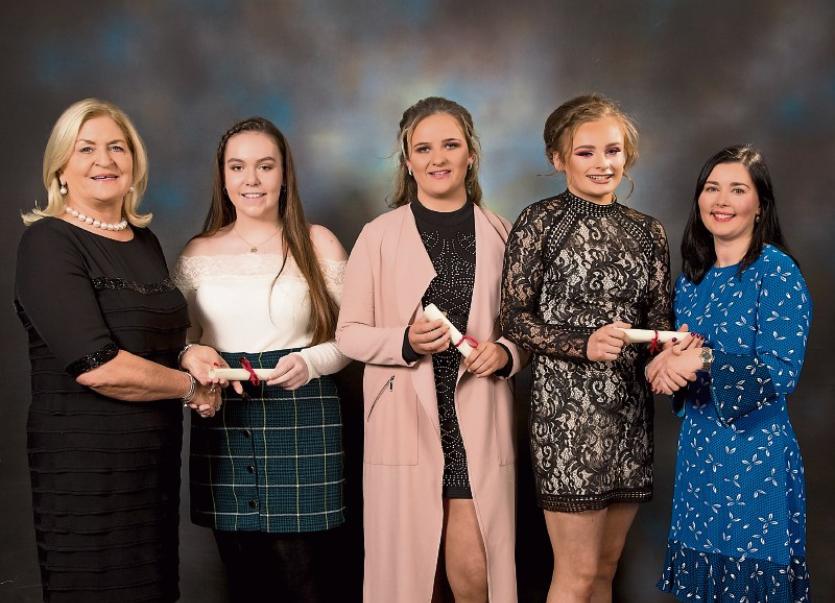 THERE were celebrations at the Strand Hotel in Limerick where three former students from Coláiste Nano Nagle were presented with Noreen McManus scholarships to support them in their third level studies.

Noreen McManus, who is married to JP McManus, gifted Colaiste Nano Nagle €250,000 in 2016 to establish the scholarship scheme at her alma mater.

Under the scheme, the three students who receive the highest Leaving Cert results and who proceed to study at third level will each be awarded €3,000 a year for the duration of their chosen course.

Speaking at this year’s presentation ceremony, principal Sinéad Moloney said the primary aim of the Coláiste Nano Nagle, is the pursuit of academic excellence balanced with an extensive range of extra-curricular activities which promote the holistic development of students.

According to Ms Moloney the fruits of this labour is very evident in the three students whose academic achievements were being celebrated.

Speaking at the ceremony, Agnes Phiro – a previous scholarship recipient – thanked Mrs McManus for her incredible generosity which, she said  embodies the ethos of her former school.

Agnes, who is studying studying Biomedical Engineering at UL said she receiving the scholarship was a blessing for her and and family who did not have to face the pressure of funding her third level education.

One of the 2018 recipients, Amanda Dawson, echoed the Agnes’ sentiments and also thanked the staff at Coláiste Nano Nagle for their dedication and support throughout their time at the school.

Head girl, Emma Kelly, spoke of the incentivising impact which the scholarships have on the school body and the pride which students feel for the recipients.

Ms Moloney used the occasion to urge each of the scholarship recipients  to embrace every opportunity they are given and to be fearless throughout their lives.

There were performances from the school choir which was accompanied by the school orchestra on the night.