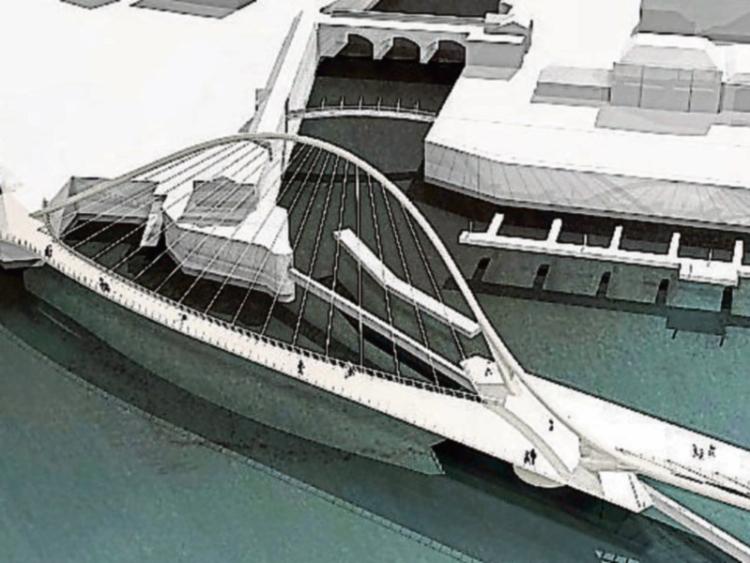 Footbridge Folly: The debate over a link on the Shannon could start again with new regeneration funding

GOVERNMENT funding announced this week could pave the way for a new pedestrian bridge across the river in Limerick city, councillors have heard.

Some €2.7m has been put in place under the urban regeneration fund by Taoiseach Leo Varadkar to create a ‘world class waterfront’ in Limerick city centre.

And speaking at this week’s full council meeting, council boss Conn Murray indicated this could see the issue of a new footbridge broached once again.

It comes more than two years after initial plans for a bridge, linking Arthur’s Quay to King John’s Castle were sharply criticised, with Independent councillor Emmett O’Brien describing it as a  Ceaușescu-style monument, in reference to the former Romanian dictator.

Cllr O’Brien asked again this week what the status is with this proposal.

And Mr Murray said the latest round of funding “will enable us to bring forward our vision for the future, and how the riverside is best used.”

Labour councillor Joe Leddin repeated his call for a feasibility study, suggesting a link going from opposite the Cleeve’s site, which will be developed under Limerick Twenty Thirty across to Howley’s Quay.​

Meanwhile, six further projects across Limerick will share in €4m from the same funding tranche.​

A social and economic model has also secured a share of €2.7m. A digital virtual reality centre has secured funding-in-principle for €2.7m, while the Living Georgian City rejuvenation project, has also been given €2.7m in principle.

The funding will be matched by at least 25% in direct grants from public or private sources, and has been welcomed by local Fine Gael Senators Kieran O’Donnell and Maria Byrne.

“This is very welcome news for us here in Limerick City and facilitates the on-going progressive development and transformation of our city centre as a great place to live and work in.

“The seven projects funded here form part of the Limerick 2030 strategy for our city centre,” said Mr O’Donnell, who sees this as “just the start of a process whereby we continue to apply and receive funding under further rounds towards the continued development of our vibrant city.”

Ms Byrne added that it is a “significant milestone” in Limerick’s development.

“This funding will enable these projects to move forward and for the city centre to be transformed as an attractive place for people to live, work and visit.

“The Urban Regeneration and Development Fund represents an unprecedented opportunity to strengthen the fabric of Limerick & the Mid-West,” she added in a statement released this week.