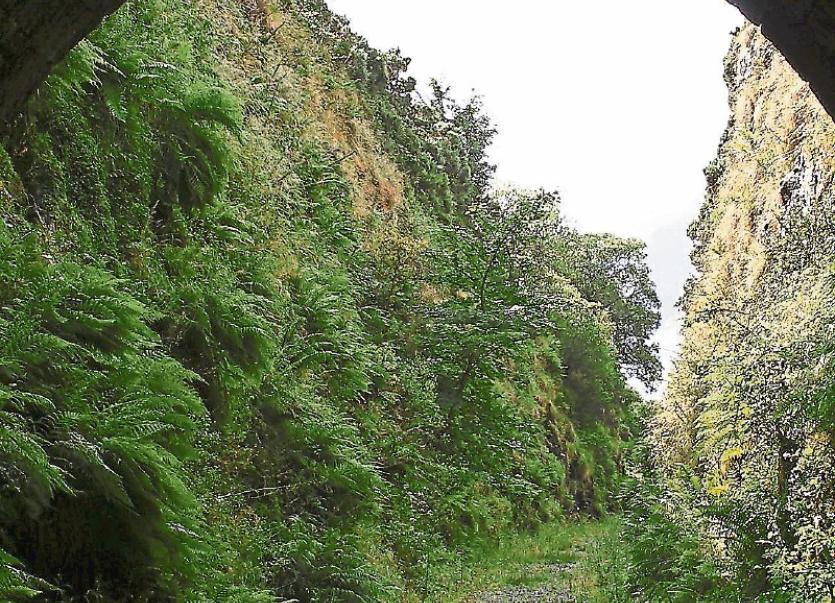 Work on building an underpass at Barnagh to reconnect the Great Southern Greenway with the historic Barnagh Tunnel is expected to begin next week,

IN what has been a bonanza week for Limerick, with over €13m in government regeneration funds allocated to projects in the city and county, one of West Limerick’s landmark projects, the Great Southern Greenway, has been given a huge boost.

Under the Rural Regeneration and Development scheme, €2.72m has been earmarked for major developments along the 40km greenway from Rathkeale to the Kerry border.

And people will see that money put into action very quickly as work is expected to begin on the Barnagh underpass next Monday.

The underpass at Barnagh however is just part of the upgrade planned for the greenway. The money will also finance the laying of a new, macadam surface along the length of the greenway, a re-alignment of the junction at Castlematrix, Rathkeale and a new access to the greenway at Ardagh.

This new access will involve a long ramp, a new footpath linking the greenway to the Ardagh Community Centre and the installation of traffic lights at the bridge, making it single lane.

The new funding has been hailed by Minister of State, Patrick O’Donovan as a “massive and historic” investment in West Limerick.

“The money will be a game changer for the project,” he said.

“The Great Southern Greenway offers massive potential from a tourism and recreational perspective. Our children and our grandchildren will be able to enjoy its rare beauty.”

Fine Gael TD Tom Neville said the regeneration money was transformative and would have a significant impact.

“I am extremely pleased to see this Government delivering on its promise to make sure that rural Ireland isn’t left behind. This funding is intended to strengthen and develop our rural communities and develop smaller towns and villages.”

“We want to see value for money,” he said. “What I would like to see is stronger connectivity between the greenway and the towns and villages along the route.”

This week’s funding announcement means that the Barnagh Tunnel project, initially proposed last year, can now go ahead. The plan involves building  an underpass at Barnagh which will re-instate the Barnagh Tunnel as part of the greenway.

The tunnel was a key feature of the old railway line which is the backbone of the greenway but was cut off from the main greenway when the N21 was re-aligned some years ago.

The underpass will be 24 metres long, three metres wide and almost three metres high and will have a slight gradient.

The plan will also entail upgrading over a kilometre of trail passing by the Barnagh railway station and will allow walkers and cyclists to branch off onto this “spur” along a scenic stretch of the line, through the tunnel to the Barnagh viewing and picnic spot.

Along with the Great Southern Greenway,  €3.8m was allocated to Murroe Community Hub and €626,369 to Glenbrohane Local Hub bringing the total to €7.1m.

In addition, the city has been allocate over €6m under the Urban Regeneration and Development Scheme. €3.49m is to be spent on three projects: the Opera Centre, O’Connell St and the Digital District while €2.7m is to be spent on making further progress on four other projects including the Living Georgian Limerick project.

“These are projects, which are going to transform Limerick in the years to come,” Mayor James Collins said, welcoming the funding.