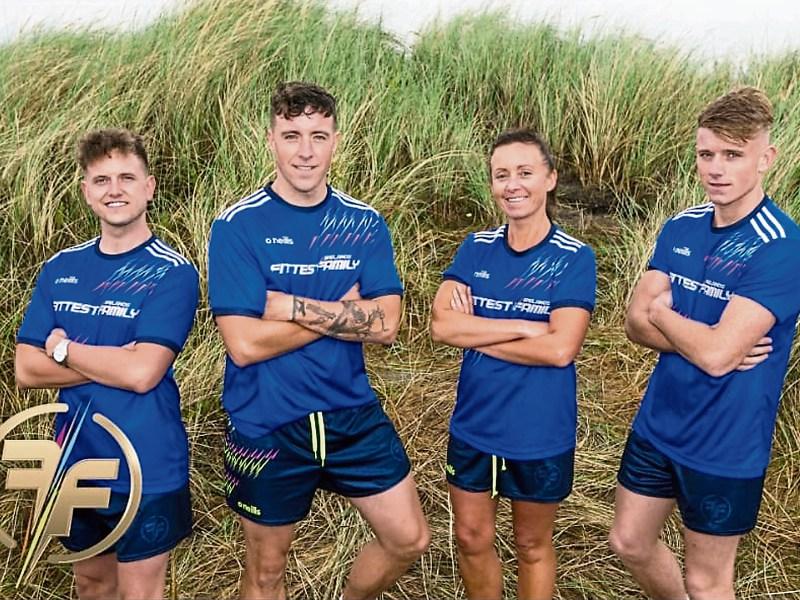 Ready to compete for the title of Ireland's Fittest Family are, from left, Matthew, Jonah, Dympna and Darren Lawlor, from Shanagolden

DYMPNA Lawlor from Shanagolden won the admiration of the country on Sunday when she took on the Hanging Tough challenge in Ireland’s Fittest Family.

The trick, she revealed to the Limerick Leader this week, was to get into the zone, “to clear your mind.” “That is what helped me,” she said. “There was no way I would have done two minutes 19 seconds practicing at home.”

It was scary too. “Even when you are being lifted up, you can feel your heart pounding,” she continued. But she was determined. “I didn’t want to be left on the pier.”

Her three sons, Jonah, Darren and Matthew were disappointed they hadn’t held out for longer, Dympna admitted, especially as a man in one of the teams ahead of them held out for over seven minutes.  But they were extremely proud of their mother.

In the end, if she or either of the lads had managed to hold on a mere six seconds  more, they would have avoided the eliminator challenge. And boy, was that hard.

The disappointment at having to face into the eliminator was etched into their faces. And it was up to themselves and to coach, Donnacha O’Callaghan to get them challenge-ready for what was an extraordinarily difficult eliminator.

But good tactics and great team coherence won the day for the Lawlors, and got them over the line and into the semi-finals.

There has been “unreal” reaction locally to their qualification for the semi-final, Dympna said. People were texting and ringing all evening on Sunday. And already tension and excitement are building for next Sunday.

“The hardest is yet to come,” promised Dympna.

You will  see what she means  when the first semi-final is broadcast this Sunday, on RTE 1 at 6.30pm where the Lawlors face off against two other teams for a place in the final.