Impossible dream: Shane Dowling looks back on a year of exceptional highs and some lows

Limerick 2018 History Makers, the Limerick Leader’s special publication on the All-Ireland, is out now 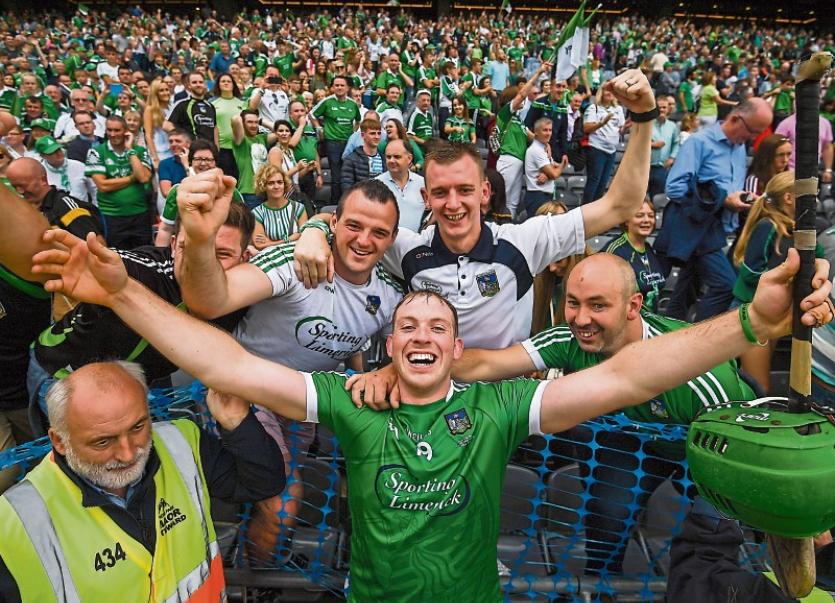 EVERY single year a young hurling mad lad from Caherdavin named Shane Dowling could tell you, without fail, what Santa was going to bring him.

It was called Liam, a DVD with coverage of the hurling championship games of that past year, culminating in the All-Ireland final.

There was Liam 2001, Liam 2002, Liam 2003 and so on. On Christmas morning before he would head out to Mass with his parents Paddy and Joan and sister Fiona, young Shane would sneak upstairs and throw on the DVD.

“Do you know what, I’ve only thought of that now, that’s what I always got for Christmas and little did I think that if there was to be a Liam 18 that I was going to be in it,” he realises.

Shane is standing in the shadow of the Limerick Strand Hotel where auditions are ongoing for the Late Late Toy Show. He’s a special guest along with the Liam MacCarthy Cup.

“Growing up as a kid I always thought it was a distant dream - you’d love to do it but it wasn’t realistic, but here I am standing here now with the Liam MacCarthy Cup at my feet. If you work hard enough, I’m not saying you will get there if you work hard enough but you’ll give yourself the best chance.”

Christmas in the Dowling household is as traditional as it gets. There’s Mass, turkey and ham and all the trimmings, and a few hours by the fire in front of the box. But this year, of course, it’s going to be extra special.

The plan is that this year Shane’s sister Fiona and her family, including Shane’s little niece Clara who is two-and-a-half, will spend the day together in the family home in Caherdavin.

“Clara is still a small bit too young to realise everything that’s going on but she’s getting to an age where she’s talking and she’s funny. Once myself , Fiona’s family and mam and dad are together at home, that’s the main thing and you know what, that might be the first day that the game is thrown on - Christmas Day evening.”

Shane pauses and thinks out loud: “It’s still hard to believe, I still haven’t actually sat down to watch the game in full because I’m scared if I do it’s like it will be in the past so I’m trying to live in the moment.

“The way I look at it is we are going on holidays to Cancún after Christmas and the minute we arrive back in Shannon Airport from the holidays that’s when everything is going to have to be in the past and we will have to look forward to the year ahead. But up until then you have to enjoy it  - God knows when it’s going to come around again. Obviously, we will be trying our best to do it every year but as people in Limerick will know that’s not always the case, so we’ll enjoy it while we can.”

While the Na Piarsaigh man is still trying to get his head around the fact he is an All-Ireland medal holder, he admits there have been some tough days in the past year, particularly when he was left out of Limerick’s starting 15.

“I’d be a very competitive person now,” he admits.  ”I don’t like losing and I’ve lost a few things and it takes a while for me to get over it but that’s part of it. Listen, everyone wants to start, there is no point in saying otherwise. And it’s fine, the last three games - Kilkenny, Cork and Galway - you look great, you come on and you make a difference and you’re a hero but it would be stupid of people to think that the previous four or five games with the exception of Waterford weren’t very, very difficult. You are a sub and you’re not coming on and you’re wondering are you going to be used at all. All you can do is keep the head down and keep working.”

He’s been branded with the term ‘super sub’ but it’s a title that doesn’t sit well.

“I don’t like the term ‘super sub’. It is what it is but some days you’ll come on and you won’t make any difference and the other side is, the last day I played 20 minutes and got one touch of a ball, albeit an important touch, but it doesn’t work every game. If you don’t get on the pitch from the start the next thing is to try and come on and make a difference.”

According to the 25-year-old, who made his senior debut for Limerick in 2012, there is no comparison in terms of the sacrifices that have to be made today compared to six years ago.

“I don’t know if demanding is the right word. If you love something enough, you’ll do it and I love it enough that I don’t find it demanding but it is a sacrifice at the end of the day. We have had a lot of enjoyment this year - this is the first year that we’ve really had a lot of enjoyment and in fairness to John and the management team they realise that,” he adds.

- This article features in Limerick 2018 History Makers, the Limerick Leader special souvenir publication on the glorious All-Ireland victory and magical homecoming celebrations, which is out now in shops