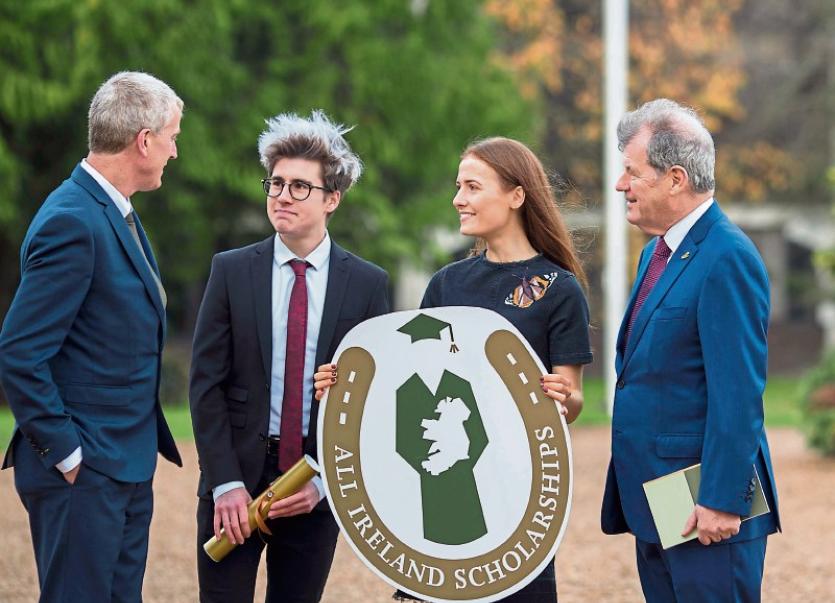 SIX Limerick students have been awarded financial support for the duration of their third level studies as part of an All Ireland scholarship, backed by JP McManus.

Sponsored by the billionaire philanthropist, 125 Leaving Cert and A-Level graduates, including six Limerick students, have been awarded scholarships worth €6,750 per annum.

“Their hard work and commitment has been awarded and they will no doubt build on their success and continue to strive for excellence in their ongoing studies and future careers.”

Our 125 incredible #AIScholarships2018 recipients! A hugely proud day for them, their families, teachers and friends. pic.twitter.com/0kvH3DfR5H

Joseph Foley from Castletroy, Eoin Corcoran from Mayorstone, Aoife Murphy from Kilfinny, Ellen Scanlon from Abbeyfeale, Jack Moore from Patrickswell and Clara Terren-Hogan were among the new recipients scholarship for 2018.

Winners were commended for their achievements by guest of honour, Limerick Senior Hurling manager John Kiely.

“It is a great honour for me as a former student and graduate of the University of Limerick to return to this stage 22 years since I graduated,” Mr Kiely said.

As the school principal of Abbey CBS in Thurles, Mr Kiely has watched four of his students receive the scholarship, he added.

"I have been that Principal who has been thrilled for All Ireland Scholarship winning students, and their parents." @LimerickCLG Hurling Manager and @abbeytipp Principal, John Kiely. #AIScholarships2018 pic.twitter.com/2JDnjk7WHx

“I have witnessed first hand the excitement, pride and joy the scholarships bring to recipients.”

"Today is an acknowledgment of their hard work, and the hard work of their teachers in achieving excellence," he added.

Now in its eleventh year, 1,371 students have now been awarded the scholarship, valued at €6,750 per year, which is awarded to a minimum of two high achieving students from each of the 32 counties.

Congrats to @ArdscoilRisLimk past pupil Eoin Corcoran who received his All Ireland Scholarship Award 2018 this morning in @UL Eoin was one of 9 of the 125 recipients that got the maximum 625 point in his Leaving Cert - he also made time for some media duties with @Live95fmNews pic.twitter.com/XF2WTQuJ8G

“The 125 recipients of the All Ireland Scholarship deserve our heartiest congratulations,” Minister for Higher Education Mary Mitchell O’Connor said, speaking at the awards ceremony.

“They are a credit to themselves, their school, their teachers and of course, their families.”

“Their path to success through third level has been made smoother and they can face the challenges that await them with confidence.”