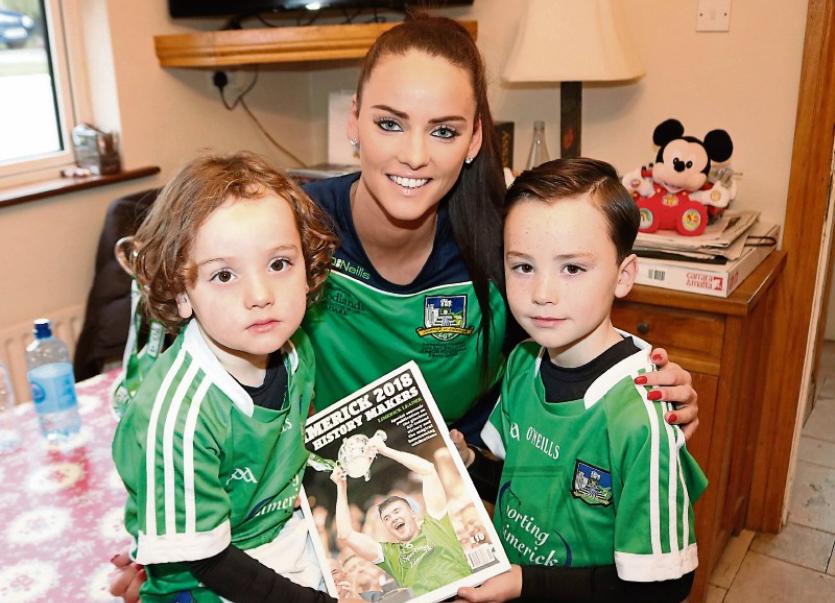 Amy Ryan with her sons Tommy and Billy and the book, which features Amy and her brother, Limerick hurler Pat Ryan ‘Simon’ Picture: Michael Cowhey

A NOT to be missed special souvenir publication which captures the euphoria surrounding Limerick’s epic All-Ireland final victory has hit shops across the county and city.

Limerick 2018 History Makers, published by the Limerick Leader, takes readers on the unforgettable journey navigated by the Limerick hurlers this year when they climbed the steps of the Hogan Stand on August 19 to accept the Liam MacCarthy Cup after a 45 year wait.

The 156-page publication includes all the match reports from the thrilling end-to-end action-packed 2018 League and Championship campaign along with exclusive interviews with players, backroom team and county board members.

There’s also extensive coverage of all the key moments since the historic victory including splendid photographs and reports from each of the homecoming celebrations along with magical insights into what the return of the Liam MacCarthy Cup means to the people of Limerick.

“There is a great mix between the match reports and glorious homecoming celebrations as well as fabulous human interest stories illustrating just what the win meant for man, woman and child in Limerick,” said Eugene Phelan, editor, Limerick Leader.

“The glossy publication offers unique coverage of the visit by the Liam MacCarthy Cup to clubs and schools across Limerick. Going through the pages you cannot but relive all the glorious moments of the All-Ireland final and the elation that followed. It’s a real keepsake,” Mr Phelan added.

Other features in the book include an interview with Siobhan Scanlon, project co-ordinator for Limerick GAA who has looked after the diary of the Liam MaCarthy Cup since August 19, and the man who is always first in and last to leave, Kitman Ger O’Connell from Pallasgreen.

Hurler Shane Dowling talks about why it’s going to be an extra special Christmas this year and explains whey he doesn’t like the super sub tag.

There’s also player profiles, messages from President Higgins and the Mayor of Limerick James Collins along with a range of fabulous human interest stories from towns and villages across the county.