‘Limerick’s library for the 21st century’: Zone at the heart of Project Opera 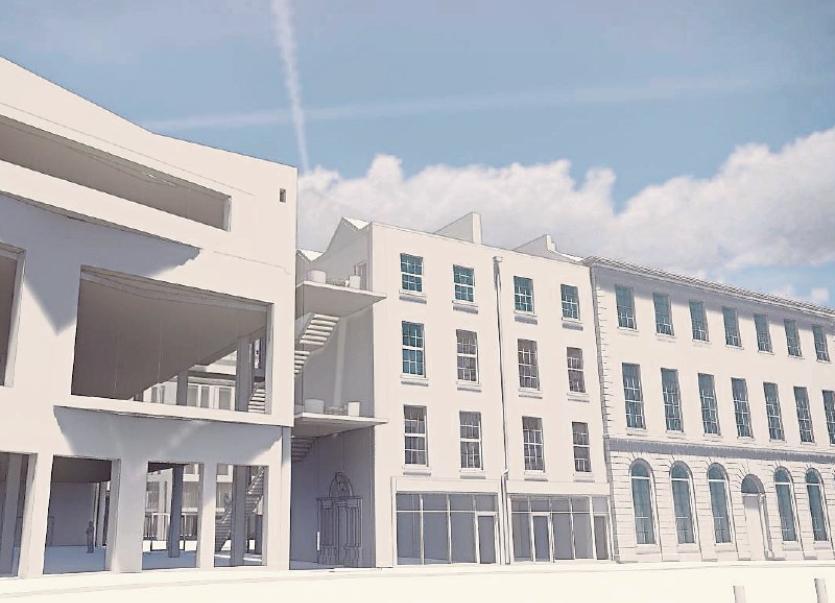 An architect’s impression of the impressive new central library, as viewed from Rutland Street, proposed for the heart of Project Opera

EXCITING plans have been unveiled for the multi-million new central library, which is being described as the “third space between home and the workplace”, at the heart of Limerick’s Project Opera.

The Limerick Leader can this week reveal new artists’ renderings on how the city’s new 21st century library will appear.

It comes as Limerick Twenty Thirty seeks the input of the public on the €180m Project Opera development – which at its heart will contain the new library – ahead of a planning application by Christmas.

Public consultations will take place on December 4, 5, 6, and 7, at various locations in the city and Dooradoyle.​

As well as “Ireland’s most technologically driven library,” Project Opera will see a vast area behind the junction of Patrick Street, Rutland Street and Bank Place transformed into a development of offices, houses, an apart-hotel, a new city library, cafes and restaurant, delivering up to 3,000 jobs.

“We are at a really exciting stage now for the project,” revealed David Conway, the chief executive of Limerick Twenty Thirty.

Some €27m was been put aside in last week’s budget for the new library, which will also serve as a civic centre, with digital spaces, meeting rooms and areas to socialise.

Metropolitan mayor Daniel Butler said: “It will create more of a living space within the city centre, a space that is open to a community in the city centre. Hopefully having a space like this will encourage people to live in the centre.”

The central library, which will spill into a public square, is being billed as a “living room” for Limerick, “a vibrant destination” and “one of Limerick’s most important social hubs and meeting spaces.”

Across four floors, the building will see a games lab allowing students to take a break from their studies.

A workshop will offer three-dimensional fabrication, while there will be digital storytelling walls, plus an editing suite utilising ‘green screen’ technology.

The complex will also include a massive video wall and meeting rooms for local communities.

Overall, the building will be divided into eight zones: a digital zone, a community space, a reading zone, with 25,000 books, a multi-purpose exhibition area, and a knowledge zone, which will see public access computers.

On top of this, there will be media studios, a supportive learning zone and a family zone, allowing space for interactive play areas for kids, and a ‘chill out’ area for adults accompanying children.

A cafe will be located in the basement, the proposals show.

Cllr Butler added: “It was always envisaged this would be a civic space, but as the times have developed and submissions have been made, there has become a need for a much broader space which can be flexible in its use and incorporate not just library space, but artistic purposes and other things.”

The public will have a chance to view the layout of the library and the rest of the Project Opera development at four separate consultations.

These take place on Tuesday, December 4, at Limerick Twenty Thirty’s offices in Patrick Street from 5pm to 7pm.

The following day, also between 5pm and 7pm, an information session takes place at City Hall in Merchant’s Quay.

The existing city library plays host to a session on Thursday, December 6, between 5pm and 7pm.

And the final consultation is on Friday, December·7 between 5pm and 7pm in the council offices at Dooradoyle.

Speaking about what will be one of the largest urban developments outside Dublin, Mr Conway said: “Before we submit the planning application, we want to give the public one last opportunity to make submissions. After some disappointments in the past when the site was in private ownership, we are now finally about to see one of the most eagerly awaited developments in the state.”