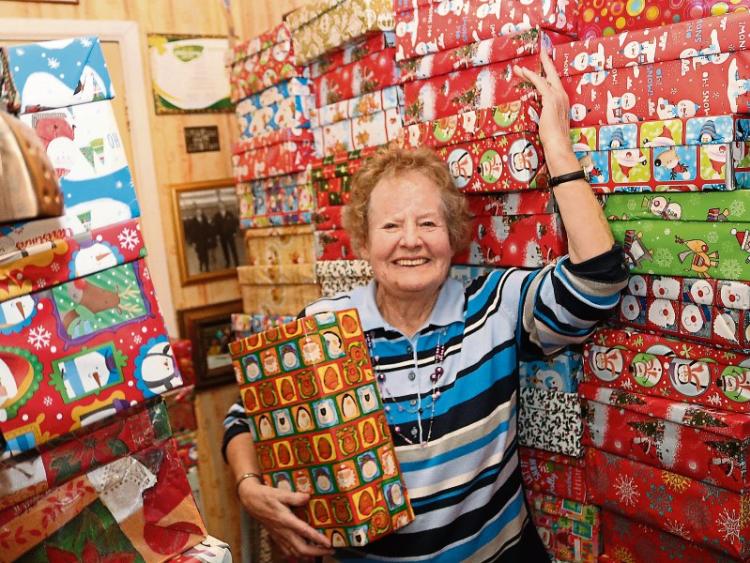 Sigi Murrihy with some of her Christmas shoeboxes Picture: Michael Cowhey

LIMERICK hero Sigi Murrihy, who has been collecting toys for the last year, has now shipped off more than 230 Christmas shoeboxes packed full of gifts to less fortunate children in developing countries.

The Caherdavin woman has spent the last year lovingly collecting gifts and restoring toys to be added to the 234 shoeboxes she put together as part of the Team Hope Christmas appeal.

A German native, Sigi was inspired to get involved with the annual appeal due to her own experience as a child during World War Two.

“We’ve nearly been climbing over all the boxes this year,” she laughed.

Her collection was also given a boost this year with the help of a local business, she added.

“At the beginning of September, I met a young man called Wesley and I showed him the Limerick Leader article about my shoeboxes,” she explained.

“He placed it at the entrance of his business and a big bag of toys was collected there. That really helped.”

And like Santa Claus himself, Sigi had her helpers this year to make sure her gifts were shipped out on time.

“I have to say a big thank you to Carmel O’Brien, who wrapped a hundred boxes for me, and a big thank you to Wesley and his colleagues. I have to thank the ICA, the Active Retirement Group in Caherdavin, Michael Gleeson, the Curiosity Shop, Mary Tuite and Bridie O’Connor. To everyone that helped me, gave a hand or donated; thank you.

Sigi was inspired to get involved with the annual appeal due to her own experience as a child, when was forced to leave her home in Freiburg.

After much of her town was destroyed during a series of bombing, she found herself without any of her old toys. Receiving a little doll in a brown paper doll was “like heaven had opened”, she said.

Sigi has a winning formula to fill her shoeboxes which includes a piece of clothing, like a t-shirt, gloves or scarf, a big toy, a toothbrush and toothpaste and a small toys. She plans to start her collection for next year’s appeal in January, with any toys left over from this year to be gifted locally.