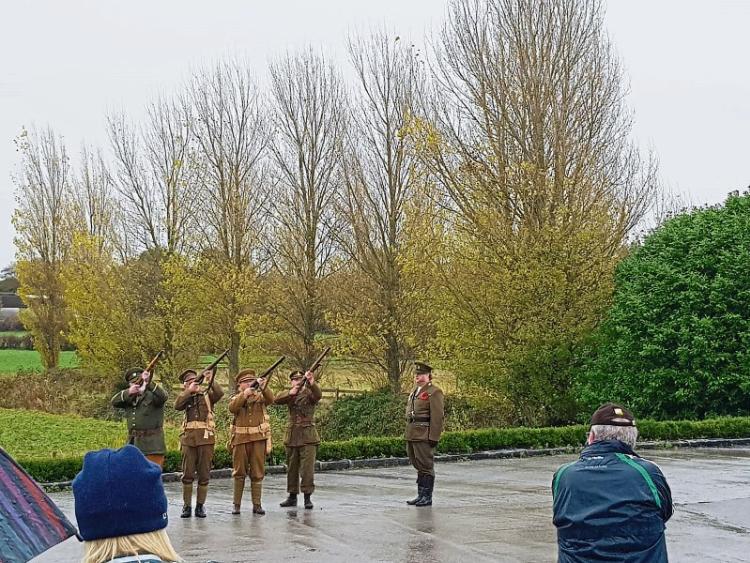 THE names of the 22 soldiers from Kilmallock who lost their lives in World War One were called out at a special ceremony in the town on Sunday morning.

To mark the centenary of the end of the war locals gathered at 11am at Kilmallock Museum where a plaque was unveiled dedicated to the memory of Andrew Heffernan, the 21 other Kilmallock men who were killed during the war and in honour of over 30,000 Irishmen who never made it home from the Great War of 1914-1918.

Local woman Imelda O’Riordan read out the names of the 22 soldiers who lost their lives.

One such soldier was Andrew Heffernan of Abbey view, Kilmallock. He was a Corporal in C-Company of the 2nd Battalion of The Royal Munster Fusiliers.

He arrived in France in January 1915.

On May 8 1915, he along with the 900 other soldiers of his battalion received their General Last Absolution by their Chaplin, Father Francis Gleeson.

The scene is famously captured in the Italian painter Mantania’s The last Absolution of The Munster Fusiliers.

Corporal Andrew Heffernan was not one of the lucky few who survived, and like many of his fallen brothers from May 9 1915, his body was never found.

A gun salute took place at Sunday's event before members of the Defence Forces raised the Tricolour during the ceremony which was attended by in the region of 100 people.

Poignant moment as the Tricolour is raised in Kilmallock to remember the 22 soldiers from the town who lost their lives in WWI #Armistice #RemembranceSunday pic.twitter.com/ylkHEKylvq

Organisers extended their thanks to local gardai, musicians, and local businesses for their support.

Armistice Day was marked in a number of locations throughout the city and county including Kilfinane and Bruff.

There were at least 20 fatalities of young men from Bruff, Grange and Meanus between 1914 and 1918 in the war.