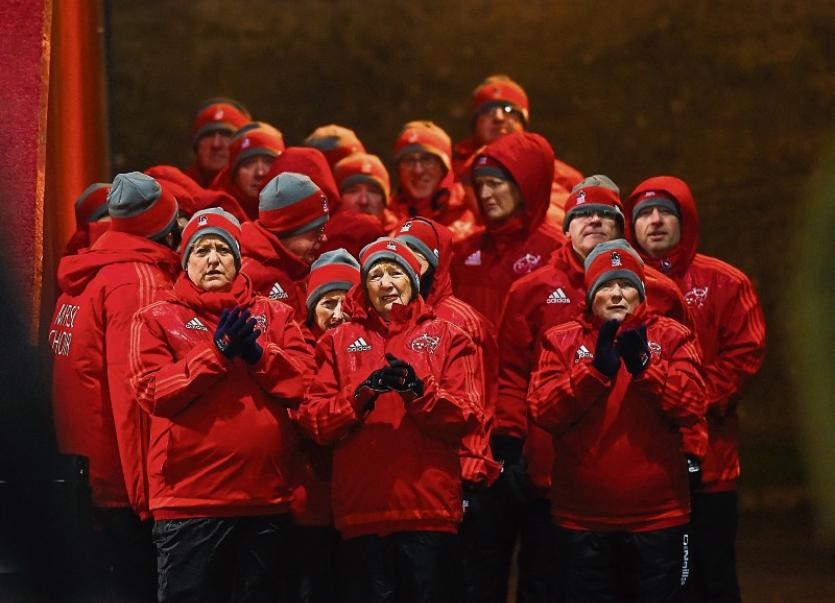 Whatever the weather, members of the Munster Rugby Supporters Club choir are in fine voice, as they will be at their 10th anniversary celebration concert in UCH Picture: Diarmuid Greene / Sportsfile

THE MUNSTER Rugby Supporters Club choir will be singing on the stage of UCH instead of on a pitch to mark their 10th anniversary.

The brilliantly titled Stand up and Sing concert takes place on Sunday, November 18 at 8pm. Under the direction of Robin Pender, the concert will have something for everyone – from rugby anthems to opera and choral classics.

The choir will be joined by Cara O’Sullivan, leading Irish soprano who will delight with arias from the world of opera and musical theatre.

The MRSC choir is part of what makes Munster special. In April 2008, 45 members of the supporters club chose to commit to hours of travel from all over the province and beyond for rehearsal every week in Charleville. Many had never sung in a choir before but they all had one thing in common – a love of Munster rugby. Just a few short months later the choir was invited to perform at the opening of the new Thomond Park, when Munster played the All Blacks on November 17, 2008.

Since that day, the choir has become an important part of the pre-match entertainment at both Thomond and Musgrave Park. They have also helped to lift the team and crowd at away matches.

Eddie Cashell, Cork city, has been in the choir since 2008. He makes the journey every Tuesday evening to Charleville to rehearse, has only missed a handful of home games in 10 years and has attended three quarters of away games. He even lives in Munster House. Eddie bought it from the Munster synod of  bishops  of the Unitarian Church.

“Munster is almost a sense of belonging. It is like a tribe,” said Eddie. He says it is hard to explain the sense of camaraderie of the choir.

“It’s like an extension of your family. I’ve ended up with 50 friends that I’d never have known,” said Eddie, who jokes that only he and Bono play to up to 28,000 every two weeks during the season.

Eddie said their singing lifts the crowd and lifts the team. He is hoping they get the same support back for their 10th anniversary concert.