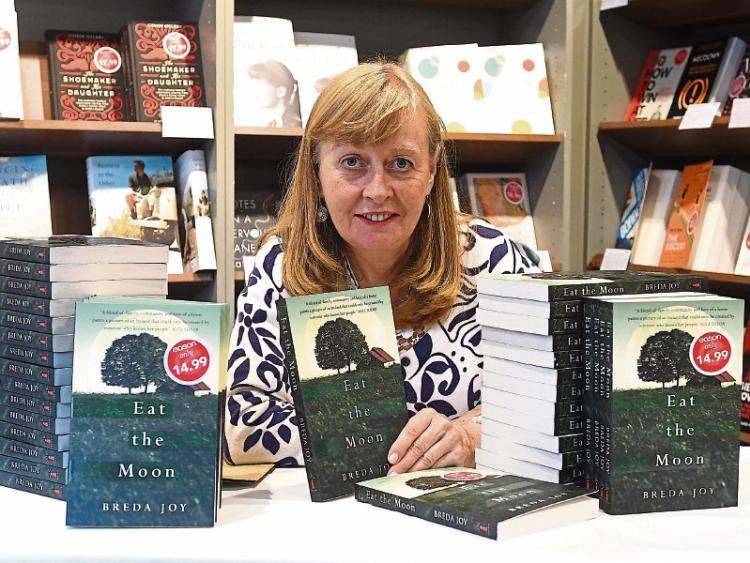 Breda Joy with her novel Eat the Moon

IT is third time lucky for journalist Breda Joy, whose debut novel Eat the Moon began appearing in bookshops a month or so ago.

Breda had two previous novels written, but hidden away, unpublished and unheralded, when Eat the Moon caught the attention of Poolbeg Press.

“The appearance of my first novel is nothing short of a miracle for this self-confessed procrastinator,” Breda admitted ahead of a visit to Newcastle West where she will give a reading.

“Most of my life, I’ve been tinkering with poems, plays, short stories. The majority of them never got anywhere but they were my long apprenticeship. I tried my hand at two novels. They’re still upstairs in storage.”.

Eat the Moon is set on a Cork farm in 1969, the year of the moon landing, where a horse aptly named Apollo is a key character in the unfolding of a family drama.

“Broadcaster Joe Duffy can take some of the credit for the plot,” Breda said, explaining that one of the main characters was inspired by a report on his show on why some trauma survivors stop speaking or refuse to speak in social situations.

“After I heard this discussion, I invented a character, Tamara, who refuses to speak.

“She is part of a story about families, about parents and teenagers, about community and a rural Ireland that’s fading away, and about how refusing to give up can lead to redemption. It’s a coming of age story,” Breda said.

“Even in rural Ireland of 1969, a time when every field had a name and every cow had a personality, and community and family were tightly bound together, watching a beloved child self-destruct was a trauma that could divide, and even destroy,” she continued. “But parents battle against all odds to save their children. This book chronicles how one family makes it out the other side with the help of a very special horse.”

Alice Taylor has said of the book that it “paints a picture of an Ireland that could only be created by someone who knows her people” and the language and detail Breda brings to the book will resonate with anyone who lived through the 1950s, 1960s and 1970s.

But although Eat the Moon is Breda’s first published novel, she is no stranger to seeing her name in print. She has worked as a reporter with The Kerryman and now works part-time with Kerry’s Eye and is the author of three previous non-fiction books: Brian Crowley - Against the Odds; Hidden Kerry, The Keys to the Kingdom and The Wit and Wisdom of Kerry.

Breda is a graduate of the M.Phil in Creative Writing from Trinity College and her poetry has been published in literary journals including The Stony Thursday Book, Icarus and the Cork Literary Review and most recently in the anthology The Deep Heart’s Core. She has been short listed for the Francis MacManus Short Story Competition and the Green Bean Novel Fair.

Breda Joy will give a reading at Newcastle West library on Thursday, November 15 at 8pm. The event is free and all are welcome to attend.