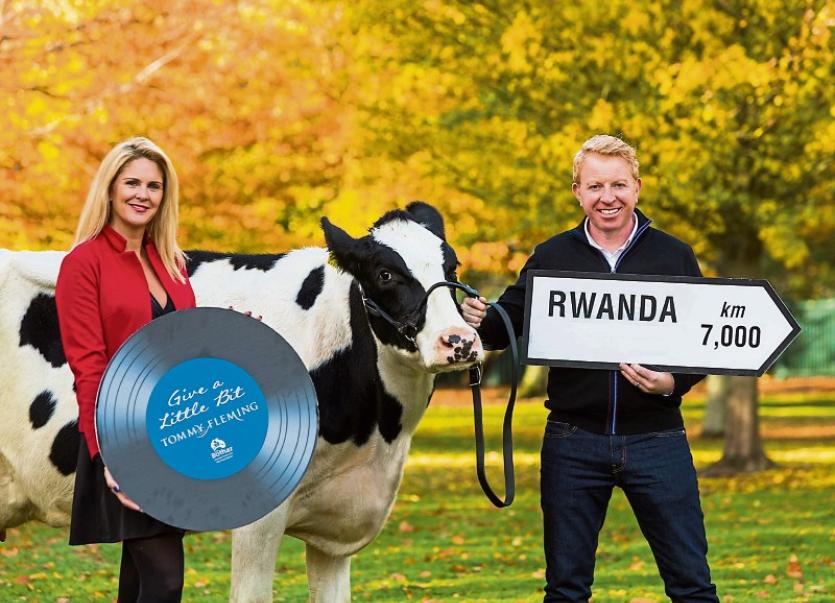 ONE of Ireland’s most popular singers launched a charity Christmas single this Monday after making a 20,000km round-trip to record it.

Multi award winning Tommy Fleming travelled to Rwanda to record Give A Little Bit – the 1977 hit by Supertramp – with local teenagers in support of Limerick based aid agency Bóthar’s Christmas appeal.

The appeal is focused on widows of the horrific Rwandan genocide of 1994 and, particularly, on supporting the government’s ‘One Cow Per Family’ programme aimed at reducing extreme rural poverty by providing every family with a cow.

The song was recorded by Tommy with students from Rwamagana High School in east Rwanda.  It is available to download from Spotify, iTunes and other online outlets via Bóthar’s website www.bothar.ie.  A four-part series of short videos documenting the trip will also be broadcast on Bóthar’s social media platforms, starting from today at 7p.m.

Tommy took time out of a busy schedule in the run up to the September recording of Voice of Hope II – the much-awaited follow-up to his Voice of Hope album, his biggest selling album to date – to travel to the tiny African nation.  Rwanda is still in recovery mode from the horrific genocide of 1994 which triggered the bloodiest 90 days in the history of the world as up to 1million people were slaughtered in a country slightly larger than Munster.

Bóthar has lifted thousands of families from poverty there with the gift of in-calf Irish dairy heifers and other food and income producing animals since it began operations in Rwanda 21 years ago and it was this work that attracted the Sligo native’s attention.

“I come from a farming background as my parents were small dairy farmers so it’s in my DNA. When I looked more into what Bóthar do, I thought my parents would just have loved this idea so I was only too delighted to travel out, see the projects and record the song,” said Tommy.

Donations for Bóthar’s Christmas appeal range from €10 for a guinea fowl to €1,800 for an in-calf Irish dairy heifer and right up to €25,000 for a Bóthar Ark – enough to purchase animals to look after 85 families.

For more information on Bóthar go to www.bothar.ie.