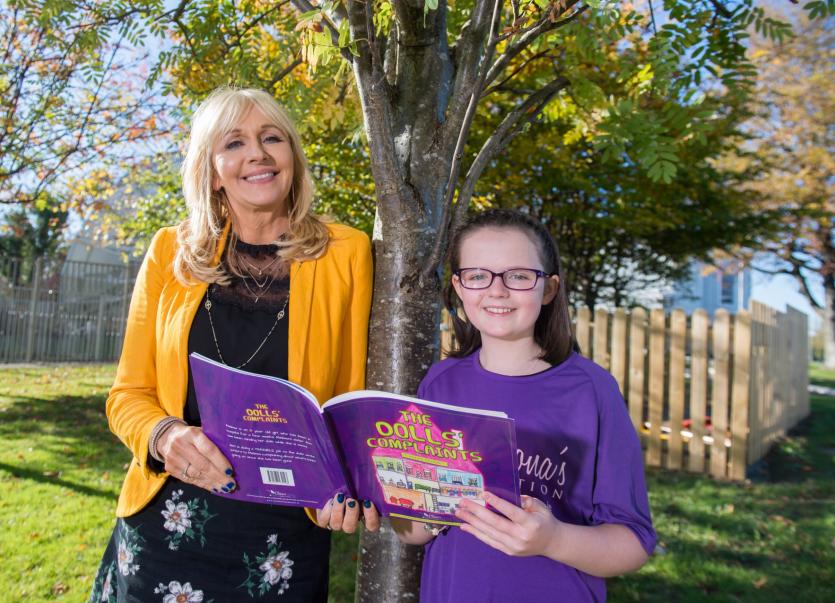 Presenter, Miriam O'Callaghan and Keeva Delaney with the book

HOT off the press and ready to hit the shelves in Dunnes Stores nationwide is The Dolls’ Complaints, a fantastic book written by the very talented 11-year-old Keeva Delaney.

What is extra special about the book is that all proceeds from the sale of the book - which is priced at a very reasonable €8 - will go directly towards Limerick charity Cliona’s Foundation, which provides financial support to families of children with a life-limiting condition.

Keeva - a fifth class student at Tinryland National School from  from Ballycarney in Carlow - came up with the idea of the book nearly two years ago while on family holiday and in the space of an afternoon had the title and contents nearly completed.

“I wanted to bring toys to life and thought that dolls could have some very funny stories to tell to tell about how they feel and how they are treated,” she said.

The book centres on an eight-year-old girl who finds herself in hospital and her sister brings her in letters of complaint from her dolls at home, who miss her terribly.

“When we read the stories we thought they were hilarious,” said Keeva’s mother Maurita and all of the family, father Eric and sisters Jane and Sarah helped Keeva fine tune it and helped with the illustrations.

“Even our dog Reilly gets to feature,” the young author added.

But bringing it the step further and putting it to good use was the next challenge and that’s where Cliona’s Foundation came on board.

“I had picked up an information leaflet on Cliona’s Foundation two years ago while visiting Kilkenny Hospital and I was struck by the real, practical support they provide to families nationwide. I remember saying at the time that I would love to do something for them,” said Maurita.

“So I contacted them about the book and their reaction was overwhelming and they have been so supportive,” she added.

Co-founder of Cliona’s Foundation, Brendan Ring, runs a printing Company called Cube and Brendan and his team at Cube have made what was a dream a reality.

“We are privileged that Keeva and her family chose Cliona’s Foundation and we have developed a wonderful special relationship with them in bringing this beautiful book out. Keeva is an amazing girl and it is so special for us to be the beneficiary of the proceeds,” said Brendan.

Cliona’s Foundation provides financial support to families of seriously sick children to help with the non-medical costs of caring for their child.

“Our family travelled that journey with our daughter Cliona for eight years while she was very sick with an inoperable brain tumour.

“We met many parents who were struggling with the travel, accommodation and daily food costs. In addition they are dealing with all the mounting bills at home on a reduced income as in nearly all these cases one of the parents gives up work to be with their sick child.

“When Cliona passed we wanted to do something to help these families. 11 years later we have supported over 500 families across 29 counties.

“But this would not have happened without the public's generosity as we receive no state funding and it is a struggle to generate enough funds to meet the demand,” Brendan said.

“We currently have 34 families on our waiting list,” he added.

Patron of Cliona’s Foundation, Miriam O’Callaghan, was blown away by the book when she met the Delaney family tweeted: “Just had the joy of meeting the uber talented writer 11-year-old Keeva Delaney who has just written her first children’s book.”

Just had the joy of meeting this uber talented writer 11 yr old Keeva Delaney who has just written her first children’s book and she is donating all of the proceeds from her book to @ClionasFDN pic.twitter.com/NmSYHKKg9h

The book The Dolls’ Complaints will be on sale in Dunnes Stores nationwide from Thursday, November 15 for €8.

“We really are hoping the book will be an amazing success for Cliona’s Foundation and we are so thankful to Dunnes Stores who have agreed to stock the book exclusively in all their stores nationwide.

“This is just amazing and every cent of the €8 paid for the book will be going directly to Cliona’s Foundation. A very special gesture by Dunnes Stores,” Maurita added.