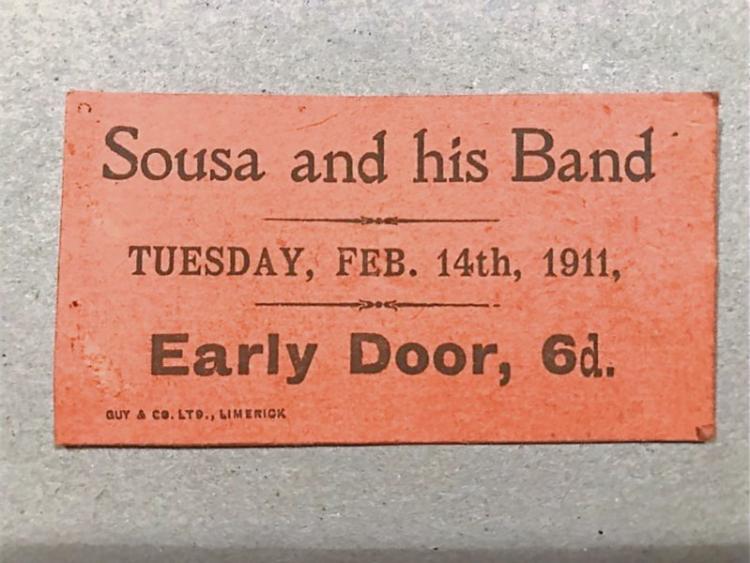 Michael Costelloe, Banogue, was gifted the Carl Hertel musical instrument by a neighbour. Michael, a well known agricultural contractor and hedge cutter in south Limerick, decided to get the musical instrument repaired as it was showing its age. As he carefully broke it down to transport it Michael’s eye was caught by something bright orange against the dark wood.

He discovered three bundles of tickets for Sousa and his Band in the Theatre Royal in Limerick city on Valentine’s Day in 1911. They look like they were printed yesterday.

“They were definitely put in there to be found because they were in three separate bunches under wedges of timber. They were pressed against each other,” said Michael, who began to do his homework.

He found out that Sousa is the legendary American composer and conductor John Philip Sousa, born in 1854, who died in 1932. Among his best-known marches are The Stars and Stripes Forever  –  the national March of the United States of America.

“Sousa and his band did a European tour in 1911 and came to Limerick,” said Michael. He says the piano made in the 1800s must have been retuned by Piggott and Co, George Street, Limerick in 1911. And one of the tuners placed the tickets inside.

“They were piano tuners in Limerick. Some of the tickets were actually stamped with Piggot & Co Ltd,” said Michael. Another Limerick company, Guy and Co, printed the tickets and they were printed to last.

“I found 21 of them. They are card. They are in 100% perfect condition. They were dry stored. The whole thing is very interesting,” said Michael.

Award-winning historian, Sharon Slater said it is a great find.

“Discoveries such as this just go to show how much of our history is still out there, waiting to be found. How many other old pianos, clocks or wardrobes are holding the treasures of the past.

“These tickets tell so many stories, that of Sousa and his band, of Guy’s printing company, of entertainment in Limerick in 1911 and of the owner or player of the piano, all from this small artefact. It is a reminder not to overlook this kind of material when going through our own homes,” said Sharon, who also uncovered an advert in the Limerick Leader and a review of the concert. Despite the tickets hidden in the piano, the Leader reported that the Theatre Royal was packed to its utmost capacity at the performances given by the celebrated Sousa Band.

“The music was delightful and the large audience thoroughly appreciated the performances. At the close of the evening’s performance the band rendered some pretty Irish airs, and, needless to say, they were loudly and enthusiastically applauded,” read the review from 1911.

The next question is are the tickets valuable? Sharon said there is a large community of collectors online who might be interested in them.​ Michael just wants them to go to a good home or a museum before his children get their hands on the tickets!

“The Limerick Museum would be the best place for one of them. The Hunt holds more international artefacts while the Limerick Museum holds local material,” explained Sharon. If anybody is interested in the tickets, email donal.oregan@limerickleader.ie