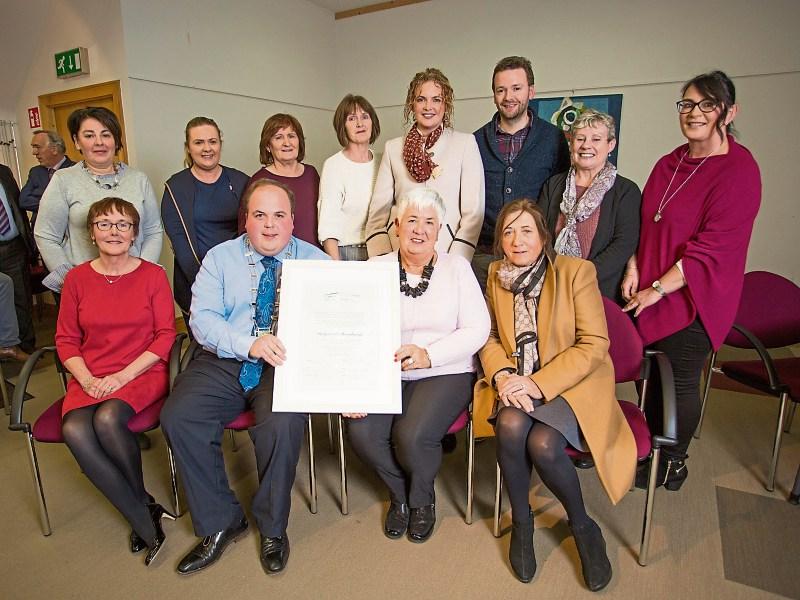 HAILED as “one of Ireland’s finest tourism ambassadors”, Margaret O’Shaughnessy, director of the Foynes Flying Boat and Maritime Museum, has been given the highest civic honour by councillors in the area.

“I am honoured to recognise your contribution not only to Foynes but for your contribution to tourism in this region,” he said, having traced Margaret’s career and given a detailed account of her role in founding and developing  the museum which now welcomes some 60,000 visitors each year.

Anybody else, Cllr Teskey said, would have retired by now, but Margaret never gives up.

“She is already planning to build a new wing to the museum to incorporate a 110-seater cinema, a mini-conference centre, an extensive archive library and a large arts space for exhibition,” he continued.

Plus, he added, a wine bar will open in the restaurant on November 30.

“You are an inspiration,” Cllr Teskey told Margaret. “I want other communities and groupings to buy into the idea that anything is possible if you put your mind to it.”

Whenever Margaret has come seeking funds or support, she has “never come with a bad reason”, Cllr Kevin Sheahan said. Promoting tourism in a small village is not easy, he acknowledged but Margaret “has defeated all the pessimists”.

“What Margaret has achieved with the people around her is absolutely unique,” Cllr Richard O’Donoghue said. “For that you need somebody who is unique themselves.”

Margaret was an institution in Foynes, Cllr Stephen Keary said, but she had also represented the area on the national and global stage and was a tireless ambassador for Limerick. He described her as a true entrepreneur and innovator whole “unrelenting energy and commitment to Foynes” were the reasons for her success.

Limerick is in the top five for visitors which might come as a surprise to many, Cllr Emmett O’Brien said, He paid tribute to Margaret for her part, along with Minister Patrick O’Donovan, in bringing the Wild Atlantic Way as far as Foynes and developing the Shannon Estuary Way.

Minister O’Donovan, who was unable to attend, sent a message in which he acknowledged Margaret’s work and role in Foynes and for tourism and said: “Margaret has rightfully received recognition from individuals and groups from home and abroad for her tireless work. It is fitting that her own local councillors have now sought to give her this reception.”

“I am delighted to see your hard work is being recognised,” Tom Neville TD said.

“I have to be honest and say I would not change one day of the last 32 years,” Margaret O’Shaughnessy said in reply to all the good wishes.

“While the museum is now firmly established, we have never had it easy,” she pointed out. And there is a constant sturggle to pay bills, keep the jobs going and maintain the building.

But, she added: “When you are down and feeling at your worst, something or someone always seems to turn up with a donation of either money or some valuable artefact from the Flying Boat days.”

“We all need to recognise the potential of tourism in our own areas and do all we can to preserve our local history and be proud of where we come from,” she said.

She acknowledged the support she had received over the years from the local authority, Shannon Development, Failte Ireland and the Department of Culture, Heritage and the Gaeltacht.

“Thank you sincerely for giving me this great honour. I greatly appreciate it ” she said, speaking from the heart.

“I am delighted to accept it, not just on my own behalf but also on my husband Tom’s behalf, my family, the board of the museum and the wonderful team we have there. “