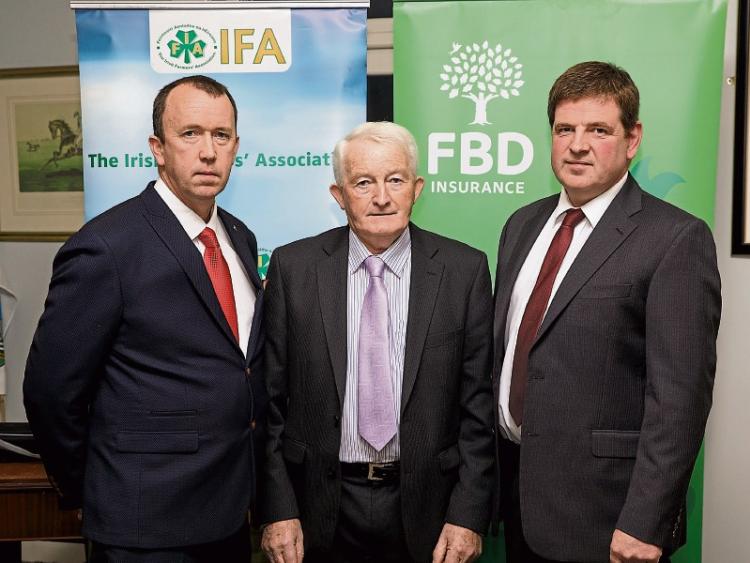 ON A RECENT visit to Cappamore, Limerick IFA chairman Shay Galvin said he overheard someone say the only thing Pat Fogarty has not been involved with is the ICA!

Mr Fogarty was one of nine nominees for the annual Paddy Fitzgerald memorial awards held in the Dunraven Arms Hotel. The ceremony was started 20 years ago by IFA members in Limerick in honour of the late Caherconlish man. Mr Fitzgerald  served as Munster vice-president and was also a founding member of FBD, marking 50 years in existence this year.

IFA farm business chair and Oola man, Martin Stapleton said the Paddy Fitzgerald awards are an opportunity to celebrate those who put themselves forward on behalf of their neighbours and their communities.

“Every rural community can point to achievements that would not be possible without people stepping up to make it a better place. The Paddy Fitzgerald awards celebrates those who can say they left their mark,” said Mr Stapleton.

That sums up Mr Fogarty from Portnard. In a presentation on the night, Mr Galvin described him as a person who has been passionate about the welfare of rural Ireland for almost 50 years.

“Pat’s mottos is ‘never expect a person to do something that you are not prepared to do yourself’. It is safe to assume that Pat was influenced by a former champion for the cause of rural Ireland namely the late Canon John Hayes, founder of Muintir na Tire, in whose local area Pat was born and reared,” said Mr Galvin.

Within the IFA, Pat was involved in forming the Cappamore branch of the IFA in the early 1960s.

“He was elected as branch chairman, president and delegate to the county executive. He was actively involved in setting up IFA branches in  neighbouring parishes. Pat helped secure compensation for farmers regarding  ESB pylons which were creating a nuisance in the Cappamore area.

“Pat was amongst the youngest to participate in the 1966 Farmers Rights walk to Dublin and was prominent in numerous rallies and demonstrations most notably the 1967 road blockade and produce blockade.

“In recognition of his contribution to IFA he has been awarded honorary life membership. His contribution at branch level was similarly acknowledged in 2017 by way of an inscribed plaque,” said Mr Galvin.

Outside of the IFA, Mr Galvin had a long list Mr Fogarty’s accomplishments, projects and organisations that he was involved with to read out.

Married to Mary, they have four adult children -Michael, Elaine, Maria, and Aine. In Mr Fogarty’s spare time, which Mr Galvin can’t imagine there being very much of, he Pat spends it farming. Originally dairy farming Mr Fogarty changed to sucklers.

“Without fear of contradiction I can say that the late Paddy Fitzgerald would justifiably be proud of Pat Fogarty and what he has achieved for the Cappamore area. Pat has been involved in many committees spanning many areas almost from the cradle to the grave and everything in between,” said Mr Galvin.

And anybody that knows Mr Fogarty will tell you he is a gentleman to his fingertips.

The special guest at the ceremony in Adare was EU Commissioner Phil Hogan.

“Travelling throughout Europe in my role as Agriculture Commissioner, I am struck by the fact that in every rural region of every EU member state, farmers are at the heart of volunteerism and community life. Paddy Fitzgerald’s spirit lives on in communities across Ireland, and indeed across the EU, and the nine nominees can be very proud of their immense contribution to rural life,” said Commissioner Hogan.

IFA president Joe Healy said the awards represent the spirit of volunteerism and the selfless dedication of people to the betterment of their communities.

“Each of the nine nominees had the honour of being chosen by their county executive. The cornerstone of IFA’s work is the willingness of farmers to give of their time in representing their fellow farmers. It is only fitting that this should be recognised and I would like to thank FBD for their support for this prestigious event,” said Mr Healy.

FBD chairman Liam Herlihy said the late Paddy Fitzgerald worked unselfishly to better the life of farmers, first through his work with Macra in County Limerick and then in the NFA and Cork Marts IMP.

“We at FBD Insurance try to embody a bit of Paddy’s spirit by working closely with agricultural organisations the length and breadth of the land to make life better for farmers. We are working hard to reduce accidents on farms every day through our farm protect programme, but it is down to individuals to make changes and to encourage farmers to adopt best practice now in order to set a good example for the next generation of Irish farmers,” said Mr Herlihy.

The winner of the Paddy Fitzgerald award was Michael Davoren of Clare IFA.