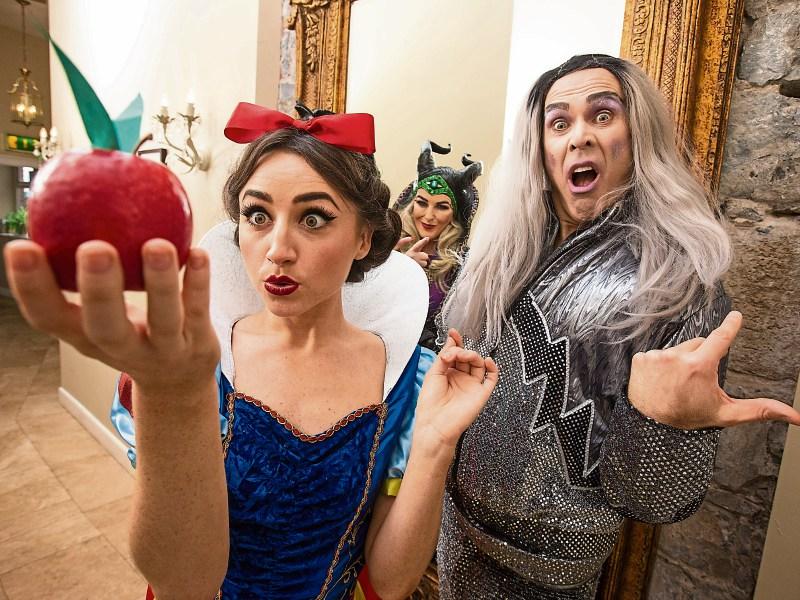 Hayley-Jo Murphy as Snow White and Katherine Lynch as the Wicked Queen Varicosa with Richard Lynch as the Magic Mirror Picture: True Media

MIRROR Mirror on the wall, who is the fairest of them all?

Audiences in Limerick will find out the answer to the famous fairytale question this holiday season when the University Concert Hall hosts its seventh annual pantomime spectacular.

After rave reviews for Cinderella last year, a star-studded cast returns for a magical rendition of Snow White to be enjoyed by the whole family.

Playing Snow White is Hayley-Jo Murphy, who returns this year after her stunning performance as Cinderella last year.

Comedian Katherine Lynch will play the Evil Queen, and The Voice star Richie Hayes is the Prince, while Leader columnist Richard Lynch is the Magic Mirror.

UCH Director Sinead Hope said she was very excited about this year’s panto production, coming hot on the heels of a season of goodwill that has been spread across Limerick long before Christmas.

“There’s great celebration across Limerick from the hurlers, footballers, UL winning the University of the year award and the University Concert Hall celebrating its twenty-fifth anniversary, so we want to keep the party going,” Ms Hope declared at the launch in No 1 Pery Square this Tuesday lunchtime.

The much loved tale gets a a contemporary twist in Snow White “as you have never seen it before,” according to the producers.

The shows will run at the University Concert Hall from Thursday, December 20 to Sunday, January 6, with the exception of Christmas Eve, Christmas Days and January 2.