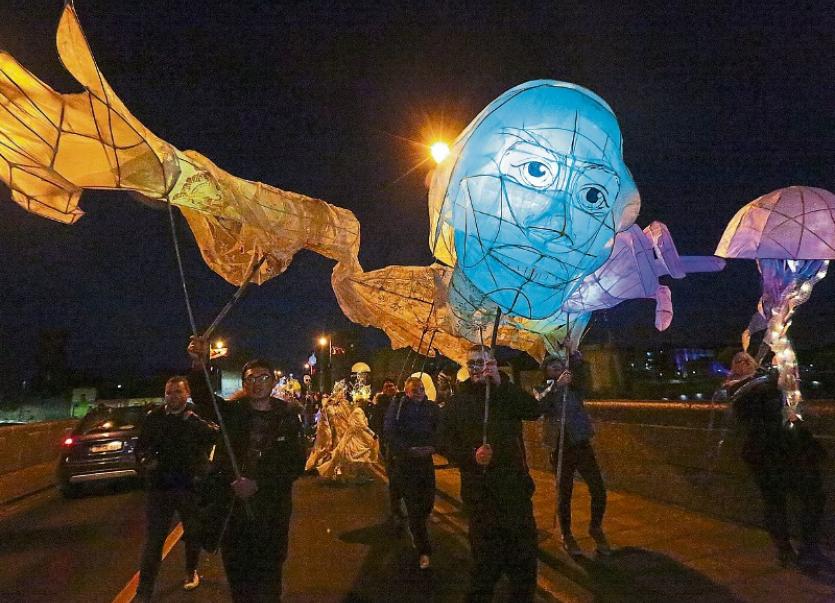 THERE was spook-tacular fun at the weekend in Limerick city, with hundreds joining in the Halloween celebrations.

As night fell on Limerick on Saturday night, more than 300 people gathered at City Hall for a special parade to mark the ancient festival of Samhain, which traditionally signals the beginning of winter.

It was the centre-piece of the first ever festival by the same name, with Martin Shannon of the Lumen street theatre group saying he is delighted with how it went. He also highlighted an open-water swim by night which was organised by Swimmable Limerick.

“It was immensely successful. It was really emotional to see how the parade was. All the events were very well attended, none more so than the swim. ​The only thing which surpassed it was the parade itself,” he said.

Despite chilly temperatures, everyone was in high spirits, Martin added.

“We had our large Bishop’s Lady ghost, and she was being chased by 200 quakers trying to capture her. We also had four or five Bishop’s Ladies who were lifesized and dancing around her,” the organiser told The Leader.

And in a nod to the part of the city the activities were taking place in, there was an impromptu rendition of ‘There is an isle’.

Up to 100 lanterns were released into the River Shannon providing a spectacular vista on the dark October night.

The aim was to “banish the darkness and remember the souls of loved ones”.

Mayor James Collins, who was out and about over the Halloween Bank Holiday weekend says it is Limerick’s ambition to “own” the October festivities.

“The bars were busy, we saw people in fancy dress having fun. There was just so much going on. There were workshops going on because of Samhain. There were screenings going on as part of the Richard Harris Festival. It was just very busy,” he said.

The mayor revealed that in years to come, Limerick could be welcoming its own food festival, saying that the ‘Food on the Edge’ movement have visited the city.

“We gave them venison stew served outside from a cauldron. We had organic stuff. They were blown away. We’d love for them to come to Limerick,” he added.

Martin says he hopes the festival is back “bigger and better” next year.