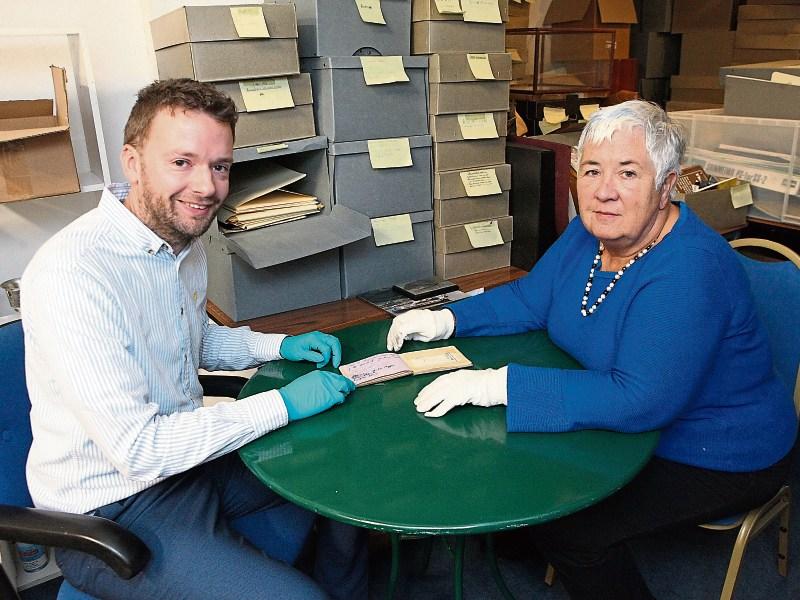 ALMOST three decades after it was opened, new material is still flooding into the Foynes Flying Boat and Maritime Museum.

Every week brings some new piece of information or photograph or artefact, according to museum director Margaret O’Shaughnessy, who has become adept at piecing all these bits and scraps into the wonderful tapestry that is the story of the early days of world aviation, with Foynes as a hub.

Among the most recent little gems to arrive is a little black autograph book in which Des Scales, then a teenager fascinated by aviation, collected the names of some of the well-known people and famous celebrities who passed through Foynes during the flying boat era.

Those who stand out immediately include  Frank Aiken, Irish Minister of Defence from 1932 to 1932 and later Tánaiste, Sir Anthony Eden, British Foreign Secretary on three occasions, the first in 1935 and later to become Prime Minister 1955-57;  Tim O’Driscoll the head of Irish aviation in the 1930s and Capt Kelly Rogers, the Irish pilot who became Winston Churchill’s private pilot.

But  the real diamond of the bunch is aviation giant Charles Lindburgh who signed his name on July 8, 1937. Lucky Lindy made history by becoming the first man to fly non-stop from the US to Europe in May, 1927

“Foynes during the flying boat era was no stranger to the rich or the famous,” Margaret O’Shaughnessy acknowledged. The long list includes Bob Hope, Ernest Hemingway, John F Kennedy, Yehudi Menuhin and Gracie Fields. But the story behind the autograph book is a more local one and reflects how so often, the story finally comes home.

“When flights began in 1937, we had no hotel or guesthouse in Foynes. The Monteagle Hotel had been taken over to become the terminal building for the flying boats. As a result, dignitaries  were taken to Ard na Coille, then the home of the Scales family,” Margaret explained.  “Dignitaries stayed there and were looked after very well.”

The Scales’ only son Desmond collected their autographs and the little black book moved on with him when he evenutally  left Foynes, having joined the aviation business, starting with Pan Am  in Foynes and ending his career at Prestwick Airport in Scotland.

“Desmond was here when we opened the museum in 1989 and he and I became great friends,” Margaret recalled. “Sadly, earlier this year, Des died in Scotland and when I went over for the funeral I brought a small bag of earth from his home place, Ard na Coille, to be buried with him.  Then some time ago, one of his daughters, Elizabeth asked would we like to have his collection of aviation books. “The books arrived and with them the autograph book which is now on loan to the museum.

Among the autographs is that of Capt Harold Grey, the captain of the experimental and first flights into Foynes. In a nice little twist, the museum has also acquired a silver tray which was presented to Capt Grey by the Foynes Development Association in 1937.

Now, thanks to Desmond Scales, they have his autograph too.