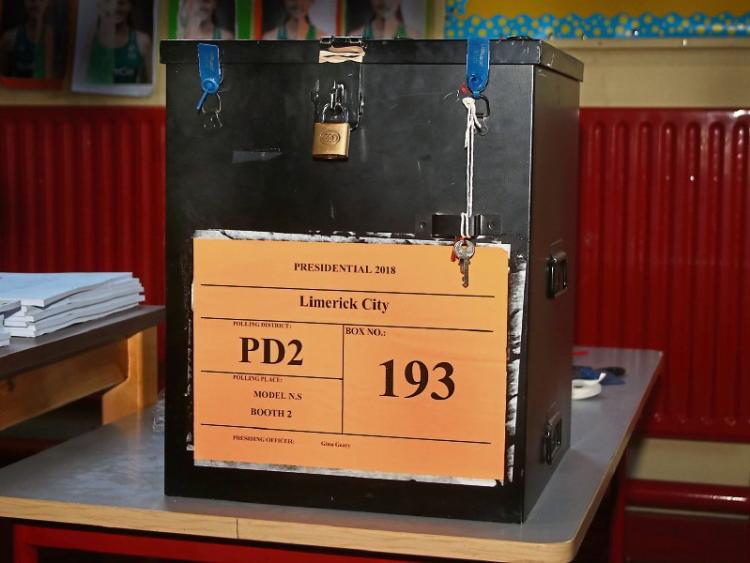 One of the ballot boxes in the Model School at O'Connell Avenue PICTURE: ADRIAN BUTLER

TURNOUT is relatively low at polling stations across Limerick as voting in the presidential election and constitutional referendum continues.

Around 300 polling booths across the city and county opened at 7am and will remain open until 10pm with the votes being counted on Saturday at the Limerick Racecourse.

Unofficial figures from polling stations, suggested that as of this lunchtime, turnout is much less than the last vote, the referendum to repeal the eighth amendment back in May.

John F Kennedy National School in the Ennis Road, which is considered a 'bellweather’ for the Limerick City constituency reported turnout of between nine per cent and 14% across its seven boxes.

It appears there is a disconnect among some young voters to this election, with one officer at the northside school telling the Leader that during May’s referendum, there were far more youngsters coming in early to vote.

Elsewhere, Monaleen National School, often a trendsetter for eastern suburbs of the city like Castletroy, was reporting turnout of just nine per cent this lunchtime.

Milford National School had just 10% turnout, while the former Scoil Carmel in O’Connell Avenue was enjoying comparatively high numbers of 15%.

In County Limerick, Caherline National School reported a 13% turnout, while just eight per cent of those registered to vote had attended Caherconlish NS by this lunchtime.

In terms of this, voters are being asked whether to remove or retain Article 40.6 of the Constitution which makes blasphemy an offence.

More than 140,000 people are eligible to vote across Limerick.