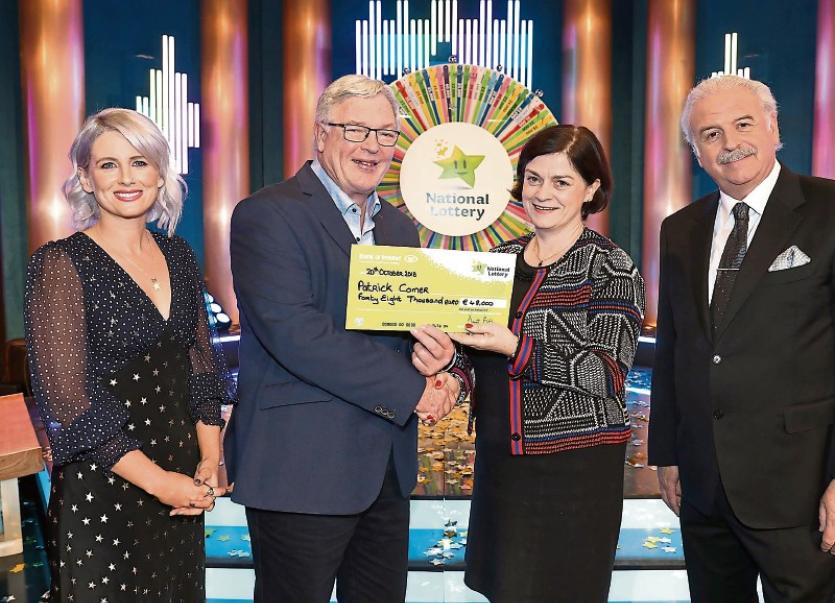 A RETIRED Limerick postman has delivered the goods by taking home a cool €48,000 from Winning Streak.

It was a whirlwind week for retired postman, Patrick Comer from Adare, who has been taken aback by the good wishes from his neighbours and friends in the village after his appearance on the National Lottery TV game show on Saturday night.

And the winning ticket was bought from Patrick’s former employer at An Post in Crescent Shopping Centre.

Patrick is father to Leah and Kara and has been married to wife Mary for the past 22 years, all of whom were in the audience cheering him on on Saturday. He retired from An Post three years ago with 37 years of service under his belt, having worked in Limerick throughout his career so he is well known throughout Adare.

He was nicknamed “the Yank” amongst his An Post friends and co-workers for years having being born in Ireland, he grew up in Connecticut in the United States where he lived for 16 years. He never lost the American twang in his accent and it was something he got friendly slagging for over the years. These days he claims to also use his accent to the annoyance of his daughters.

Patrick loves to travel, enjoys watching movies and gardening and is also enjoying the extra time afforded to him by retirement. One place that he is going to visit with his Winning Streak winnings is Connecticut where he can finally show his family the place where he grew up.

A brand new-look Winning Streak scratch card is available in the 5,900 National Lottery retailers all over the country, where as well as the chance to appear on the Winning Streak TV game show if you get three stars, players will also be in with a chance to win some great cash prizes up to €5,000.

As ever one of the lucky five players will get the chance to spin the wheel and win up to €500,000.

Nearly 30 cent in every €1 spent on National Lottery games go back to Good Causes in the areas of sport, youth, health, welfare, education, arts and heritage.