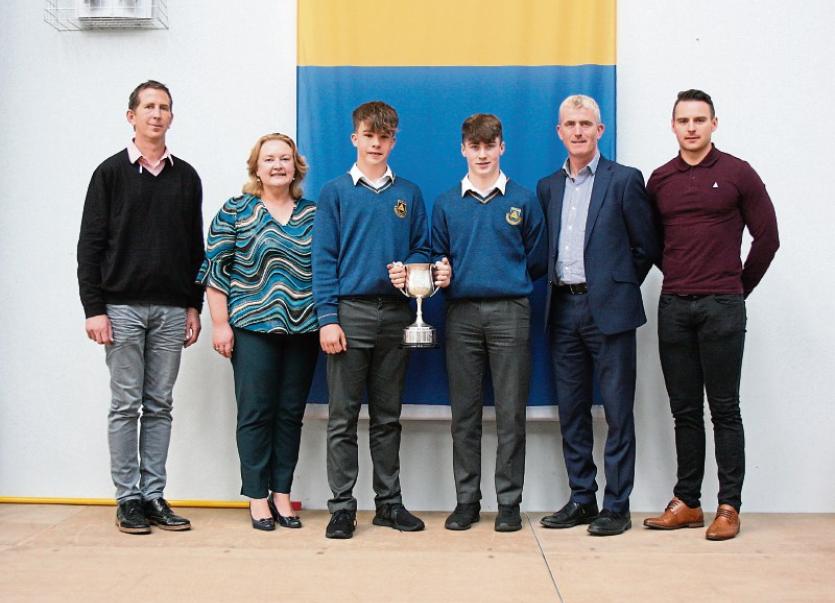 BY any stretch of the imagination it has been crazy year, said John Kiely.

“The last 12 months has seen Storm Ophelia, a couple of feet of snow, weeks of ice, crazy wind and rain and then the summer of hurling we just had. None of us could have foreseen what would have happened 12 months ago, the journey that we would all have gone on,” said Mr Kiely.

One of his latest stops on that journey was Scoil na Trionoide Naofa in Doon. The Limerick hurling manager presented the medals to the school’s U15 Munster B champions on Friday. It is the first major trophy won by the boys in the school’s five year history.

Joint captains, Adam English, Doon and Ben White, Cappawhite said it was a “huge honour” to be presented with their medals by the All-Ireland hurling winning manager. The two 15-year-olds are two names to keep an eye out for in the future.

Head girl and head boy, Kyle O’Connell, Pallasgreen, and Andrea Ryan, Doon, welcomed Mr Kiely to the school and to the stage where over 600 pupils, staff and parents awaited. The hurling team has joint captains and joint coaches – Sean O Maolain, Galway and Michael Collins, Fedamore. They detailed the journey to winning the Raymond Hogan Cup.

With 37 on the panel, Mr O' Maolain said it gives an incredible edge to training. Mr Collins said the players wanted to go training in the first week of  September.

“This competition doesn’t start until the end of February. We had to break the news gently it might be November before we started training. They weren’t happy,” said Mr Collins. They played a challenge  during a mid-term break, trained in all conditions when pitches were flooded,  and that hunger was a big part of the team’s will to win. Both men thanked Mary English, Adam’s mum, who helped sate that hunger with an endless supply of oranges and Jaffa cakes and the Limerick County Board’s, Ollie Coffey for his coaching “wisdom and experience”.

Then it was Mr Kiely’s turn to speak and he revealed it was the first time he had presented colleges medals to students.  He said sport and school is an interesting debate.

“I often hear parents say there is too much sport, he or she is not doing enough study or vice versa – I can’t get him to participate in any sport, all he wants to do is study. Finding that balance between study and sport is a challenge for people that love sport or participate in sport. How do you overcome it?

“The backroom team, management team and players – everybody that is involved. Fifty five people we had involved with Limerick. They are the greatest asset we have. We had one saying in our group and it is good people make great things happen. All we ask of our players and management team is to be the best people they possibly can be on and off the pitch and we guarantee that great things will happen,” said Mr Kiely.

The following quote could have been said by the Abbey CBS principal but it was Eilis Casey, Scoil na Trionoide Naofa headl.