‘Jail-like’: Limerick mother and five kids turfed out of hotel for big games 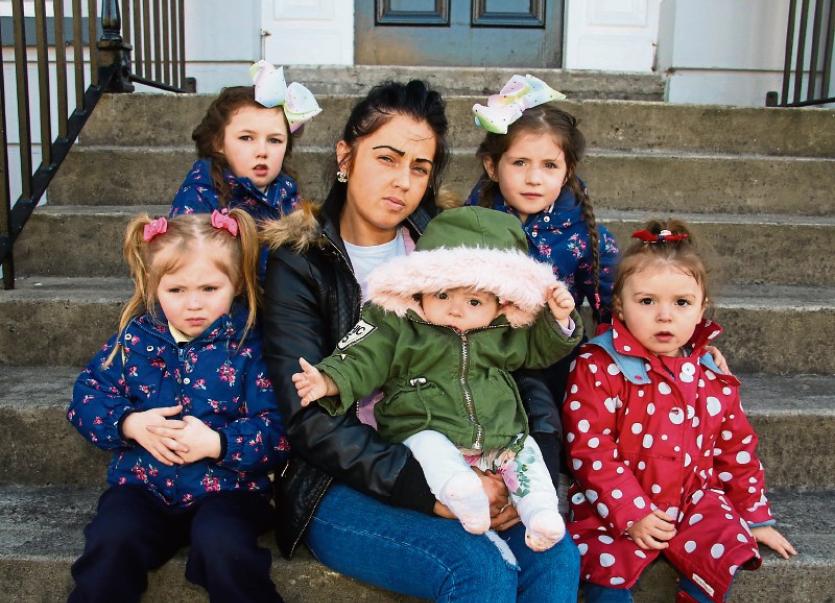 Out on the street: Aisling Bond with her children, front from left, Kelsey Bond, Cassidy Lee Bond and Kingsley Bond, back row from left, Courtney and Candice Bond Picture: Adrian Butler

A LIMERICK mother-of-six says she and her children have nowhere to go this weekend after being forced to leave the hotel they call home, as it is booked out for a big rugby match.

Aisling Bond, 32, Garryowen, says she fears her children have been ‘institutionalised’ due to the ‘jail’ like conditions of emergency accommodation.

Ms Bond, 32 told the Limerick Leader she feels “hopeless” after she was told she would have to leave the room she shares with her five daughters for the next three Saturdays in a row as all rooms are fully booked.

“I need someone to speak for me,” Ms Bond said. “I need this to be highlighted.”

“We have to move out on Friday so they can get the rooms ready for Saturday. It's the same four days before Christmas and the week after Christmas as well.”

Ms Bond and her five daughters, who are between the age of 10 and one, share a hotel room which includes a double-bed, a single-bed and a mattress on the floor.

As of this Thursday, Ms Bond had not sourced alternative accommodation but has been in contact with homelessness services. She told the Limerick Leader she hopes a room can be sourced.

Living in a hotel room with her five daughters has put a lot of pressure on her, she added.

“You’re not sleeping at night time, you’re waking up. You have no facilities, nowhere to cook. You can’t bring children out at certain times. You’re storing your milk in sinks. You’re washing your clothes in a bath. That’s not living at all.”

“There’s nowhere for the children to play. Its like jail. That’s what it's like. My children are institutionalised because they come home from school and they are just stuck in the room.”

“I try to make things happy for my children. Everything is a mess, everything is a joke and they are doing grand in school. I don’t let them see me upset.”

After she drops her children to school in the city, Ms Bond says she attends Mass in St John’s daily.

“It’s the only place that won’t throw you out.”

Families living in emergency accommodation in Limerick often face this issue when hotels are fully booked, according to Limerick homelessness charity Novas.

“We work a lot with people who are affected by having to move from hotel to hotel,” Una Burns, Novas' head of policy and communications, said.

“It often happens, it's not an unusual event sadly.”

A spokesperson for Limerick City and County Council said that the Limerick Homeless Action Team has not been informed that anyone living in emergency accommodation must move this weekend.

“This has happened in the past, unfortunately due to demand in hotels, but supports were provided to assist those who needed to move in order to ensure accommodation.

“Emergency accommodation is available for families and we continue to work with families on a daily basis to ensure transitions are successful.

“It has been recognised that the country is dealing with a housing crisis at present,” the spokesperson added.

More than 100 new social houses were recently approved by councillors, the spokesperson added.

A number of private developments, which will include elements of social housing, which are being constructed around Limerick.”

These projects include elements of social housing, the spokesperson added.