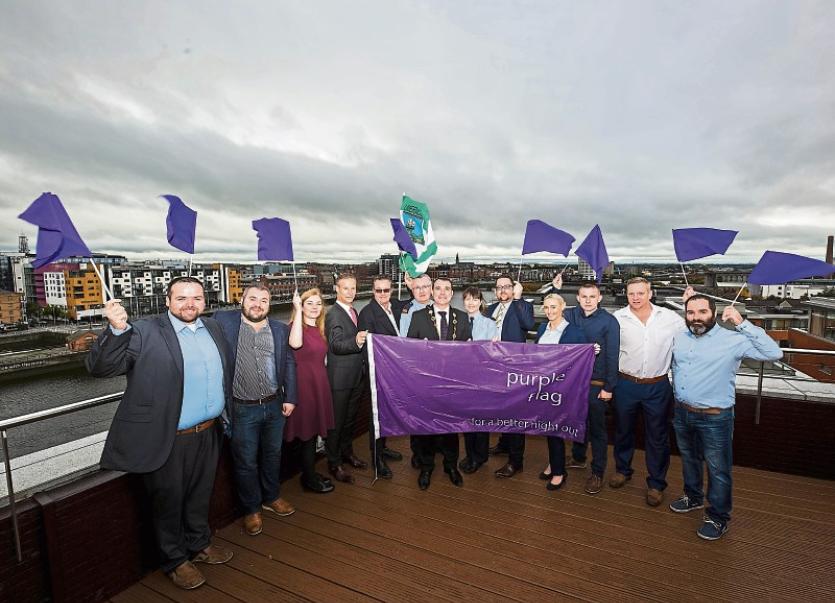 BANNERS are at the ready as Limerick goes purple this weekend to mark the first anniversary of the city receiving a the gold standard for nightlife.

The people of Limerick are being asked to join with publicans, restaurateurs and others involved in the evening and night-time economy in celebrating Limerick’s bustling nightlife this weekend.

The Purple Flag, which is recognised internationally, is the gold standard for towns and cities that meet or surpass the standards of excellence in managing the evening and night-time economy as part of an accreditation process similar to the Green Flag award for parks and the Blue Flag for beaches.

The Purple Flag district in Limerick is centred on the Market Quarter and extends from Thomond Bridge to Shannon Bridge on both sides of the river and from Barrington Street and Parnell Street to King’s Island. Businesses, the local authority and the gardai have come together to promote the Purple Flag which aims to raise the standard and broaden the appeal of the city centre between the hours of 5pm and 5am.

Mayor of Limerick City and County James Collins said it was a very important asset for Limerick and encouraged people to get behind it.

“Limerick has made significant progress in the past number of years and the Purple Flag is a great opportunity to work together for the future promotion and betterment of Limerick city.”

There has been a co-ordinated approach between Limerick City and County Council, Limerick Chamber and An Garda Síochána to develop the evening and night-time offering in the city centre and Superintendent Derek Smart from Henry Street garda station said it was “about people being able to enjoy themselves in a safe and inviting environment, that we want to encourage”.

To achieve the flag, towns and cities must prove themselves in 30 criteria that are all relevant to the evening and night-time economy and the Market Quarter and the Vintners of Limerick are “fully supportive” of it, outlined JJ Mulcahy of the Old Quarter.

“Working together in unity with the various businesses and organisations involved is the best means to see continued progress in the coming years. Progress for Limerick and all we have to offer. We warmly welcome this initiative and look forward to future developments and are honoured to fly the Purple Flag for Limerick,” he said.

“We want to encourage any interested parties to get involved and come to a Working Group meeting where we discuss ongoing issues in relation to retaining the Purple Flag but also ideas on how we can maximise the footfall in the city in the evening and night-time.”