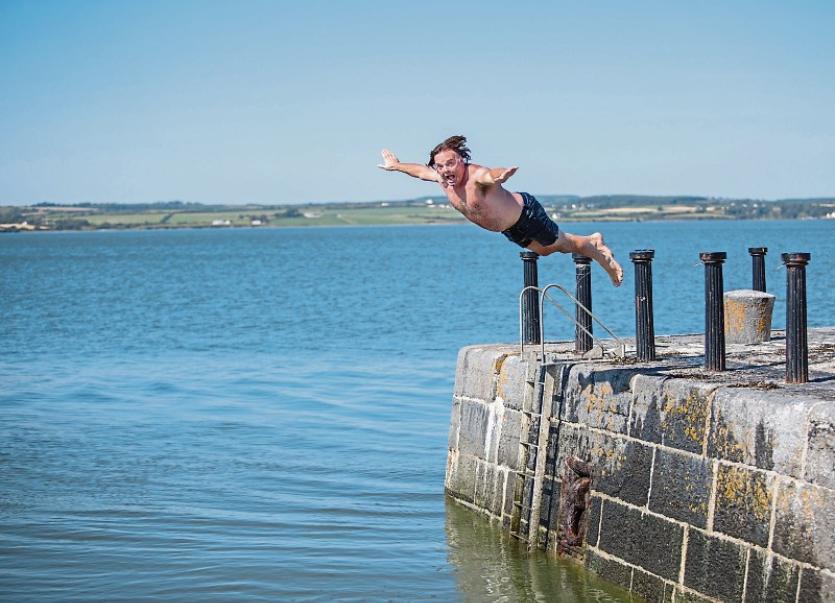 Patrick Scanlan, Newcastle West, tries an acrobatic dive off the Pier at Kilteery during the summer

A NUMBER of swimmers were rescued from the Shannon Estuary in West Limerick while others sustained cuts, scrapes and jellyfish stings over the last two summers, it can be revealed.

Daily lifeguard logs and diaries, released under the Freedom of Information Act, give an insight into the activities and challenges which lifeguards stationed at Glin and Kilteery piers face during the summer months.

Lifeguards are employed by Limerick City and County Council between June and September each year to work at the two popular bathing spots which can attract dozens of swimmers and bathers at any one time.

In addition to recording details of any incidents of note, the daily logs also detail the weather and tidal conditions each day.

The number of bathers and swimmers who entered the water is also recorded by the senior lifeguard on duty.

According to the logs, a ring buoy was thrown to a woman who was observed to be in difficulty in the middle of August.

The report states the buoy was thrown to  her “after she got caught in a rip current at Glin Pier.”

In another incident at Glin, a lifebuoy was thrown to a woman who was “suddenly caught in a current by the pier steps”.

Other rescue incidents which were logged include the guiding of two boys to shore by voice after they were “pulled out past the jetty” while, last summer, a group of swimmers were advised to exit the water “as conditions became unfavourable”.

In another incident, a lifeguard swam to assist a swimmer who appeared to be in difficulty around 10 metres from the shore.

However, the man indicated he was OK when the lifeguard reached him.

According to the documents, lifeguards have also assisted a number of people who sustained jellyfish stings.

“Was stung by a jellyfish, I wiped with a sterile wipe and advised to put Aloe Vera over it,” states one entry.

“Blue jellyfish spotted and other few ones which we’re unsure of but we think they can sting badly,” states another entry from last summer.

First aid was also administered by lifeguards to people who sustained a variety of cuts, scrapes and grazes..

In one of the more serious incidents, a young boy reported that he had cut his thumb and chin when he dived into the water.

The boy told lifeguards that he had jumped from the steps as the tide was low and going out and caught his thumb of a gate which is located at the bottom of Glin Pier.

In another incident during August 2017, a swimmer sustained a deep cut to his toes well as a cut to his knee and hand.