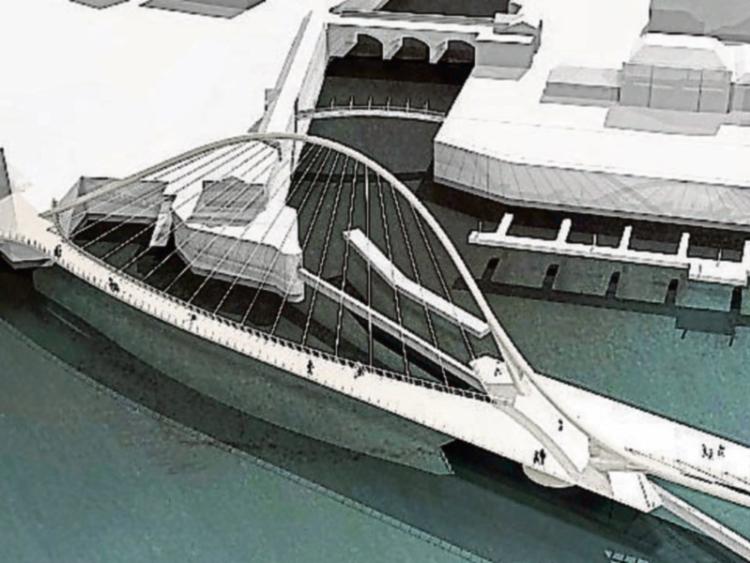 An artists impression of the footbridge that was proposed in 2016

MYSTERY surrounds the status of a prospective philanthropic donation, understood to be worth millions, which was first proposed in 2016 to fund a controversial bridge in the city centre.

Proposals for a new footbridge on the Shannon, intending to act as a “riverway crossing” between Arthur’s Quay and Merchant’s Quay, divided public opinion when consultation on the project was launched in 2016.

The project, which was expected to cost somewhere between €8m and €17m, was to receive €6m in funding from Fáilte Ireland, with to be matched by an anonymous philanthropic source.

Limerick City and County Council (LCCC) are currently “re-thinking” the original proposals put forward for the footbridge, a spokesperson confirmed.

However, a question was raised over the availability of the funding proposed for the project at a meeting of the Travel and Transportation Strategic Policy Committee this week.

Labour councillor Joe Leddin, who is proposing a new pedestrian and cycle bridge linking O’Callaghan Strand with Bishop’s Quay or Howley’s Quay, queried if the funding from the project is transferable.

“All members will be familiar with the passionate debate on the previous footbridge,” Cllr Leddin said. The previous project didn’t get off the ground due to the lack of public consultation and due to the location of the proposed project, he added.

However, a dedicated cycle bridge linking two areas that are set to be developed as strategic sites could really benefit the city, he believes.

“I really feel this type of infrastructure would get widespread support,” Cllr Leddin said.

At the SPC, Cllr Leddin was advised that while the Fáilte Ireland funding has been ring fenced, the Council is “not aware” if the philanthropic funding is still available.

In a response to a follow-up query submitted by the Limerick Leader, a LCCC spokesperson said: “At this time there is no approved project and therefore the matter of availability of a philanthropic donation does not arise currently.”

The previous footbridge proposals are “dead in the water”, Cllr Leddin told the Limerick Leader following the SPC meeting.

“What was proposed at the time was daft because it was a bridge that started and finished no-where.” But there is a need for a dedicated cycle route across the river due to traffic on the other bridges, particularly HGVs, he added.

“It can be dangerous for cyclists. We also have this strategic site over by Cleeve’s that the Council purchased as part of Limerick 2030.”

The project could “facilitate every-thing we’re talking about in terms of sustainable transport, safe cycling, healthy living,” he added.

“If we come up with a design and we go back to that philanthropic source, it is my belief, subject to the design being approved and that there’s no controversy around it, I believe there will be a commitment to contribute towards the funding.”

There is also a  €2 billion urban regeneration fund that can be accessed through the National Planning Framework, he added.

“Its projects that are innovative, sustainable and iconic that will draw down the funding.”