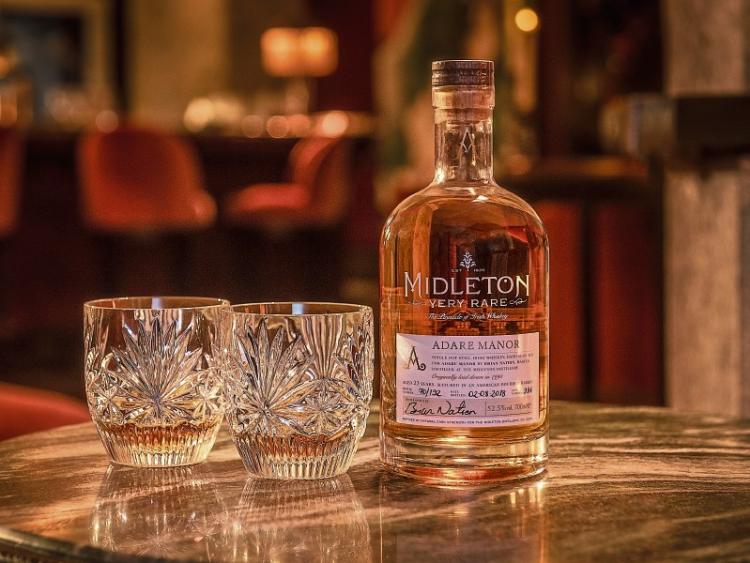 ADARE Manor in Limerick has teamed up with one of Ireland’s top whiskey brands for an exclusive collaboration that will cost €2,000 a bottle.

The plush five star resort announced this Thursday that it has collaborated with Midleton Very Rare to release an exclusive single pot still Irish whiskey, the latest addition to the Manor’s Rare Whiskey Collection.

The Manor, which is owned by JP McManus, will host a special evening to launch the new whiskey in its Tack Room, with tickets limited to 22 people at €2,000 a head.

Guests will receive their own personal bottle and a stay in a Deluxe Manor Room, with breakfast included.

Hand-selected for Adare Manor by Brian Nation, Master Distiller at Midleton Distillery, the exclusive Adare Manor Midleton Very Rare Irish Whiskey will be unveiled at the event on November 4, it said.

“We are honoured and excited to host this premium whiskey evening at Adare Manor. It is very special to be able to welcome the craftsmen from the Midleton Distillery led by Brian Nation and Barry Crockett to Adare Manor for the first time following our special collaboration, where a meticulous tasting and selection process resulted in the wonderful discovery of a whiskey, which embodies the exceptional heritage and luxury of Adare Manor,” said resident manager Brendan O’Connor.

“We are privileged to have them with us. Over the past two years, we at Adare Manor have amassed one of the rarest whiskey collections in Ireland from around the world, which has received huge praise and admiration from guests to date. Guests joining us on the 4th of November can look forward to an evening to remember featuring the finest, rare whiskeys from Midleton Distillery within the luxury setting of The Tack Room bar in the Manor House,” he added.

Brian Nation said: “We are delighted to be coming to Adare Manor in County Limerick, to mark the launch of Midleton Very Rare Adare Manor single cask Irish whiskey – a first for the Midleton Distillery.

“As the ultimate expression of luxury Irish whiskey, it is an honour for us to partner with Adare Manor and inspire their guests with the history, taste and production method of Midleton Very Rare. We are looking forward to sharing this experience with guests on the 4th of November and unveiling the next chapter of Midleton Very Rare to world.”

The resort was recently declared as Hotel of the Year 2018 at the world-renowned global Virtuoso Best of the Best Awards in Las Vegas.