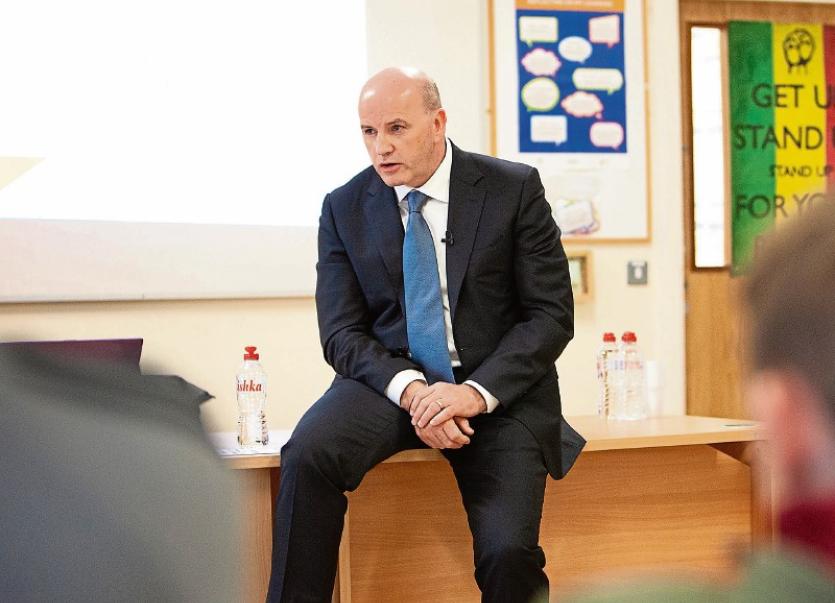 DRAGON’S Den star Sean Gallagher tried to inspire the next generation on a visit to a Limerick city school this week.

The businessman was in the city on Monday to canvass for the upcoming presidential election – and took time out to drop into St Augustine’s School in Sexton Street.

There, he encouraged its 25 students to never be afraid of making mistakes, referring explicitly to the ‘Tweet-gate’ incident seven years ago which arguably cost him victory in that Presidential campaign.

“One of the biggest fears we all have is making mistakes. I am running for the presidency of Ireland. The last time I made a mistake which cost me the election. I was asked a question on television, and I couldn’t answer it properly. So a lot of people didn’t vote for me. I had two choices: I could stay at home, or go again,” he said.

Mr Gallagher said the mistake hurt him, “because people saw me in a way that I am not”.

“Seven years later, I made a choice, that I will not let that mistake determine who I become,” he said.

Mr Gallagher – who was in Newcastle West on Friday – urged the students to be positive.

“My message for you is that I think you can do anything you want to do. Believe in yourself and support each other. Don’t say nasty things, or say anything nasty to each other,” he said.

Speaking to The Leader after the visit, the candidate said he was inspired by the presidencies of Ireland’s first two female premiers Mary Robinson and Mary McAleese – and would use their examples as a blueprint if he wins election to Áras an Uachtaráin later this month.

“Up to her [Robinson], it was seen very much as a retirement home for ageing male politicians. She totally reimagined that, and didn’t allow herself to be confined by tradition. Mary McAleese did the same. I now want to use my life experience across a life of youth work, community development, agriculture and business, to do the best for Ireland as protector of the constitution,” he said.

Mr Gallagher also pledged, if elected, to return to St Augustine's School to revisit the students and find out what they would like to see happen in Ireland.

“Limerick is a vibrant city and a vibrant county, yet we have communities who are struggling. We have still young people who are on the margins, who need opportunities, who need interventions to support them. It’s about what we can do to ensure everyone is included, everyone is respected, and nobody is left behind.”