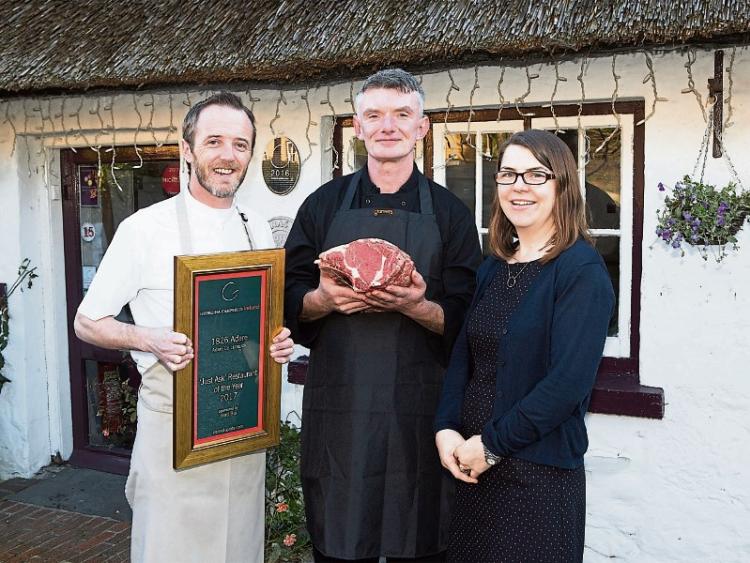 LIMERICK is continuing to play the winning game, this time in the hospitality sector, adding three top titles in the past week.

Adare Manor Hotel has been named Hotel of the Year 2019 in the Georgina Campbell Awards while John Edward Joyce of The Mustard Seed in neighbouring Ballingarry walked away with the Host of the Year title at the same awards ceremony.

Michelin Bib Gourmand awards are a judges’ choice and recognise those establishments that offer good food at affordable prices of €40 or less for a three-course meal. The 1826 is owned and run by husband and wife team Wade and Elaine Murphy with Wade as chef and Elaine as front of house.

The retained Bib Gourmand adds to the couple’s long list of awards.

The citation for Adare Manor is enthusiastic about the new lease of life brought about through the acquisition of the hotel by JP McManus and its winning combination of tasteful luxury, excellent food and engaging staff.

“Best of all perhaps, while very much a five-star resort, the revitalised hotel and its surrounding estate still retains its original familial warmth and we salute it especially for that,” the judges wrote.

Praise is also lavished on John Edward Joyce who took over the reins at The Mustard Seed when Dan Mullane retired in 2016.

“This magical hideaway could not be in safer hands,” the citation reads.

“John Edward is the genial host par excellence – and his long association with the house, and the area, makes him the perfect guide, ensuring that the very best time is had by all.”

Unfortunately, the judges note, Irish hospitality at the standard demonstrated by John Edward is not always the case.

“We are still encountering too many examples of unwelcoming staff and offhand, uninterested service. But when it is right, Irish hospitality really is unique,” they say.

All three were also acclaimed last month in the Food & Wine Magazine Awards.