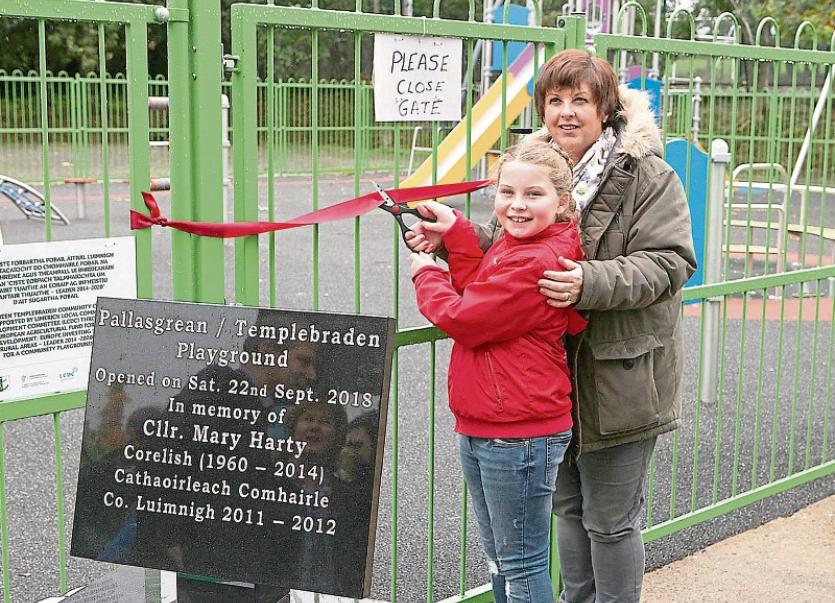 That spirit lives on as a plaque to the former councillor was unveiled at the opening of Pallasgreen’s playground on a Saturday morning recently.

Mary worked tirelessly throughout her political career for extra amenities in east Limerick. Her  brother, Eamonn, thanked the Pallasgreen-Templebraden Community Council for honouring his sister’s memory. He said it was a “proud day” for the Harty family.

After many years of fundraising, including Limerick’s Fittest Superstars event, the ribbon was cut by Emma Harding and Clare Jordan, of Ballyhoura, a major contributor. Emma, aged 10, wanted a playground so badly that she made all the craft items using her knitting and sewing skills for a Christmas bazaar.

The committee felt it was such a magnificent effort for one so young that they decided to have her and Clare officially open the playground.

Despite the inclement weather a large crowd turned up for the ceremony. Afterwards, they departed to the community centre for a reception.

Michael Ryan, chairperson of Pallasgreen-Templebraden Community Council,  thanked everyone involved in making it a special day for the community.

The don’t hang about in Pallas as he spoke at length about their next project –  restoration of the community centre which “is essential for all aspects of community”.