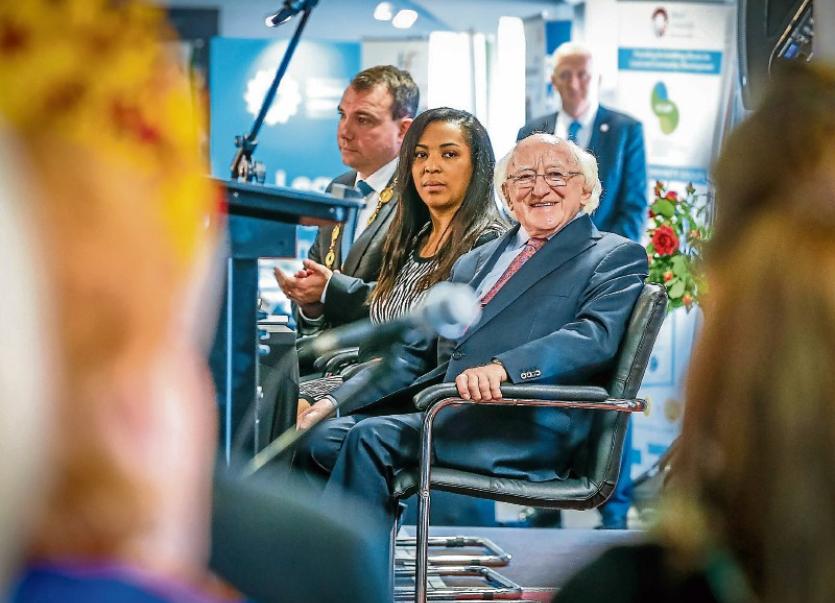 President Michael D Higgins spoke at the launch of the Belonging to Limerick strategy at Thomond Park Picture: Keith Wiseman

THE PRESIDENT of Ireland Michael D Higgins has said migrants, or “our newest citizens of Limerick” have brought “a wealth of culture and heritage that will enrich” the city and county.

President Higgins, who is now seeking his reelection to Aras an Uachtarain on October 26, addressed hundreds to launch the Belonging to Limerick three-year strategy, at Thomond Park on Friday afternoon.

The strategy, led by the Limerick Integration Working Group, aims to build on boosting migrants’ intercultural experience in local life, through a cohort of services.

President Higgins, who is a patron of Doras Luimni migrants rights organisation, said the new plan is a “strong statement” that will enable migrants to “become full participants in the life of Limerick”.

The Limerick-born president said that the city and county has “become a home for migrants, a home for their hopes and aspirations”.

He said Limerick, in particular, a long history of emigration. He referenced the flight of the Wild Geese in 1691, when 10,000 soldiers and their families left Limerick foo France. He also noted the mass exodus of Limerick and Irish people during the deadly famine in the mid-19th century, and recent generations of emigration.

President Higgins also cited the visit of former US president John F Kennedy to Limerick, when he addressed his “fellow citizens of Limerick”.

“We must, as did the people of America in the case of the Kennedy family and so many others, accepting and embracing the varied heritage of our newly arrived and their children and their descendents to come.”

Before the integration plan was launched by Mayor of Limerick City and County, Cllr James Collins, Direct Provision resident Donnah Sibanda Vuma addressed the masses, after a 30-minute speech by Higgins.

Ms Vuma, a Zimbabwean mum-of-three, said: “Belonging to Limerick means belonging to a diverse community,” adding that this new plan “addresses areas that are fundamental in fostering effective and sustainable integration within Limerick”.

The Doras Luimni committee member said being involved in the community “gave me a sense of belonging in Limerick”.