Limerick entrepreneur returns to old school with €26,000 in grants for students 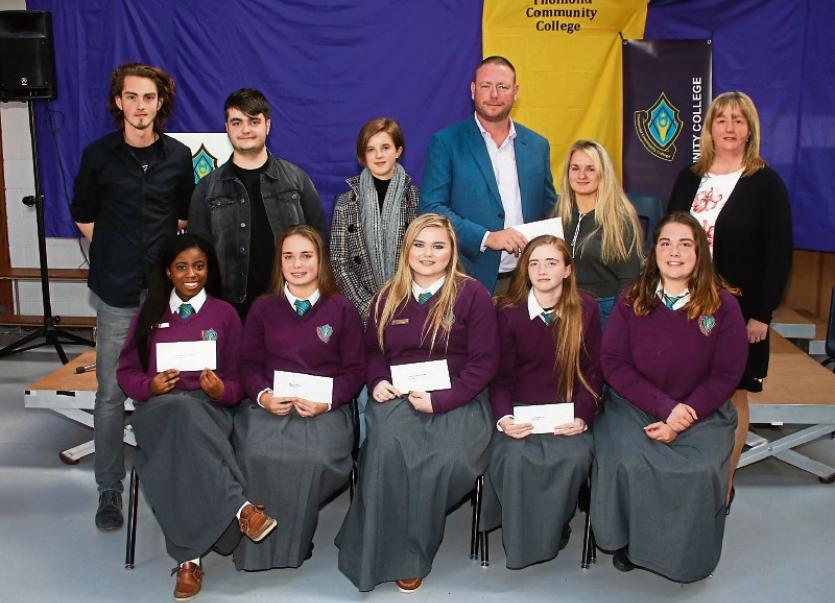 TWENTY-FIVE of Thomond Community College’s hardworking students in Limerick are to share more than €26,000 in academic scholarships presented by a former student and entrepreneur David Greaney.

Five students from second year, third year, fifth year and sixth year, along with five students who completed their Leaving Certificate this year, were each awarded scholarships from Mr Greaney, ranging in value from €500 to €2,000.

Mr Greaney, a former student of St Nessan’s College, which was amalgamated with Salesian Secondary School in 2016 to become TCC, began the Greaney Family Scholarships in 2017 as a way to “give back” to his former school’s community.

“When I look back on my time in St Nessan’s, I had great teachers, I got a great education which helped me go on to study at University College Dublin,” Mr Greaney said.

The Caherdavin native went on to become the founder and president of Synergy, a Boston-based real estate investment and development company.

“Ultimately it helped me go on to the US where I’ve had great success and it all started back here.”

“From my own experience, having a good support system around you when you are trying to get on with your academic studies and put the hard work in, its crucial,” he added.

The second year of the scholarship at Thomond Community College has acted as a massive incentive for students at the secondary school in Moylish Park, according to principal Norma O’Brien.

“It’s a huge incentive for young people to strive to achieve and do their best,” Ms O’Brien said.

“It does mean a lot to the students, it gives them a goal to aim for. Our students are very highly motivated and they are working very hard.”

Consistency throughout the school year was key, according to third year student and scholarship recipient Erin O’Callaghan from Clareview.

“I just started studying as early as I could. I stuck my head into the books and practiced as much as I could.”

“I did the subjects that I found the hardest, I studied these first. I studied every night for an hour, or a half an hour sometimes, and it slowly went into my head and I got there.”

The Greaney Family Scholarships are awarded through the Irish American Partnership, which works to “empower the next generation of Irish leaders by supporting educational initiatives” through grants, training, and scholarships.