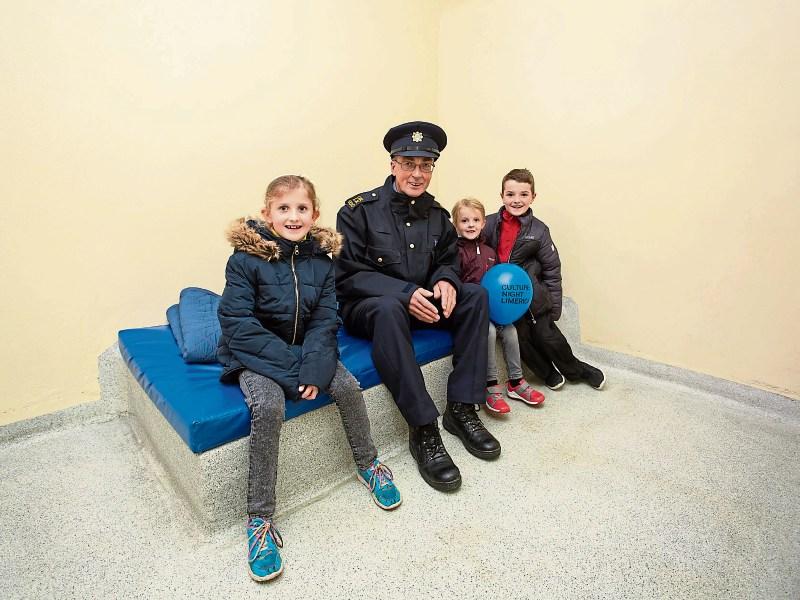 Bunking down for a night in a cell were Aine, Fiona and Kevin Walsh who visited Henry Street Garda Station with Reserve Garda Declan Prenderville

MOST people do all they can to stay out of trouble, and avoid having to visit Henry Street garda station in Limerick.

But on Friday night, there were huge queues outside Limerick’s main garda base, as an estimated 1,100 people enjoyed free tours of the station as part of Culture Night.

Lines to break into the garda barracks began from well before 5pm when tours were due to start, with Sgt Michelle Moloney saying ​they put on extra walks around to cater for the demand.

“We are fairly blown away with the response. We put it out there not knowing if people wanted to come. We were supposed to have a tour every half an hour starting at 5pm. By 5pm, we already had five tours of 20 people gone through. So the response has been phenomenal. But we're enjoying it,” she said.

On the tour, members could see the cells, the custody suite, the communications room, the scenes of crime unit, and the guns used with the armed support unit. While there was other garda memorabilia there.

For the youngsters, there was a chance to try on a garda hat, meet the garda dogs – and as a reward for completing the tour, the force gave out certificates!

“We don't normally have queues of people outside the garda station, they're usually trying to break out of here. As a guard, we are so used to stations, but to members of the public, it remains a mystery,” Sgt Maloney added.

One of those taking part in the tour was South Circular Road man Tony Flannery, who said: “It's great to see the modern stuff here utilised to fight crime.”

He joined the tour with his grandson Odhran, 14, of the Ballinacurra Rad.​

“I was down here before during primary school, and it's great to see the amount of changes they have brought on from that time. It's amazing to see the culture and the history behind this facility. The new technology impressed me most,” he said.