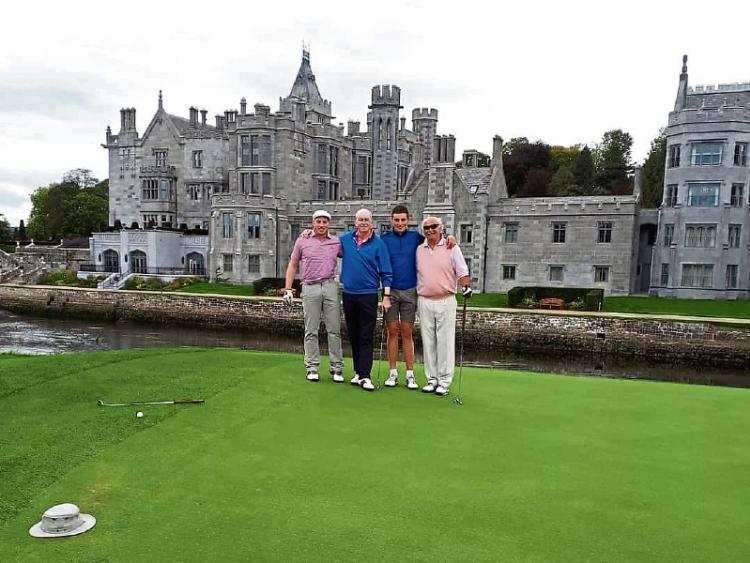 On the tee: Shane Dowling, Joe McKenna, Gearoid Hegarty and Pat Hartigan getting into the swing of things at Adare Manor

LIMERICK hurling legends of 2018 and 1973 swapped their hurleys for drivers and putters when they teamed up for a game of golf at the world-renowned course at Adare Manor.

The squad of 2018, who brought the Liam MacCarthy Cup back to Limerick on August 19 after a 45-year wait, were on the grounds of the five-star hotel and golf resort for the official team photograph to mark their epic All-Ireland win.

The large framed photograph which will be available in the coming days includes in the region of 60 people who all played a key part in the historic victory, including players, management, backroom staff and officials.

After the photograph was taken last Saturday, players and management enjoyed the VIP treatment at the manor including a round of golf on the Tom Fazio-designed course. The team looked quite the part in their golfing attire which including tartan flap caps and polo shirts.

And there were members of the victorious 1973 team on hand to impart some advice on their driving and putting.

After the golf, the players then retreated to the warmth of The Tack Room, a luxurious cellar-type bar in the hotel, for refreshments.

Unofficial team photographs are currently on sale in shops in the city and county and Limerick GAA are keen to stress that this is not the official photograph “and absolutely no monies spent on purchasing these images goes back into the player development fund which is used to help the current crop of hurlers, and the stars of the future”.

An All-Ireland hurling final DVD will also be made available in the coming weeks and will feature exclusive unseen footage including from the team bus after final.