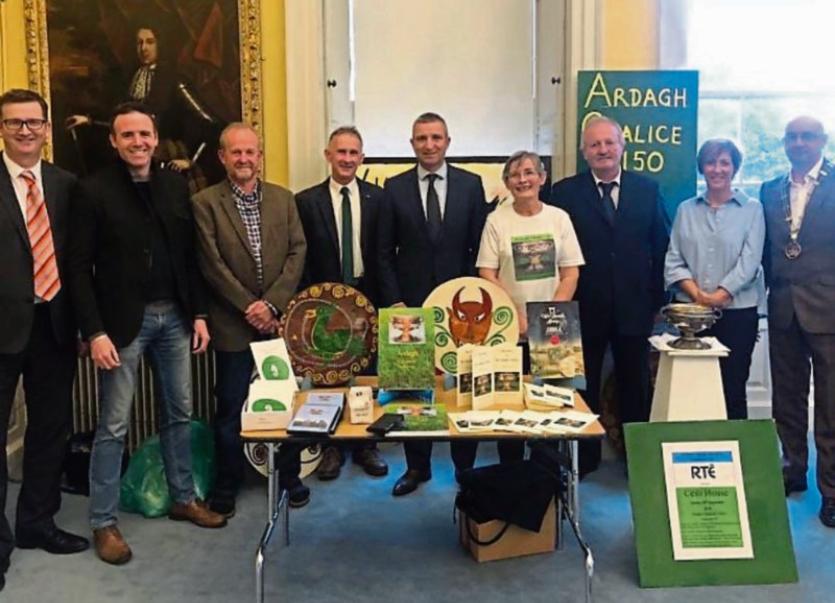 THE biggest ever celebration of Ardagh’s history, heritage and culture gets underway this weekend and runs into the following weekend.

And it promises a rare opportunity to get up close to the original and first Sam Maguire cup as well as discovering the story behind the finding of the Ardagh chalice which inspired it.

“All set to go,” was how Ger Greaney, vice- chairman of St Kieran’s Heritage Association put it, with just days to go before the celebrations marking the 150th discovery of the Ardagh Chalice begin.

The anniversary events were officially launched at ceremonies in the Hunt Museum last Thursday night and again in Ardagh on Friday night.

But planning for the double-weekend  has been ongoing for almost a year and has involved people of all ages in Ardagh, Carrigkerry, Coolcappa and Kilcolman, igniting a deep vein of creativity and drawing in different layers of the community.

This weekend’s programme opens at 6pm this Friday night with a parade  from Reerasta Fort, where the chalice and other artefacts known as the Ardagh Hoard were found by Paddy Flanagan and Jim Quinn in September 1868 on the Widow Quinn’s land.

She sold the 8th century chalice and hoard to the then Bishop of Limerick for £50 who subsequently sold them on to the Royal Irish Academy for £500.

The parade will include a number of chalices, including a replica Ardagh Chalice from the Hunt Museum as well as replicas made locally. The parade will finish at Ardagh church where there will be a concelebrated Mass as well as the unveiling and blessing of parish quilts made specifically to mark the 150th anniversary.

This will be followed at 8pm by a  lecture on the Ardagh Chalice in the nearby hall given by Dr Raghnall O’Floinn, former Director of the National Museum,  Dr Cathy Swift, Head of Irish Studies, Mary Immaculate College.

On Saturday, running from 10am until 4pm, there will be a free workshop involving five qualified genealogists who will help people to answer the question, Who do you think you are?

“We will have access to the records that are there,” Mr Greaney explained.

“We will also show people how to go about getting access to other records.”

But he encouraged people who want to take part to bring along all the information they have. “The more information you have to show us, the more specific the answers will be,” he said.

From 11am to 3pm there will be a GAA Blitz for underage players in Coolcappa and throughout the afternoon there will be a busking competition along the main street, with prizes for singles and groups at under-14 and under-18.

There will also be lots to see along the street with old-style shops and entertainment.

There will be a concert on Saturday evening, the only event of the weekend where a small fee of €5 will be charged, and a Vintage Car Rally on Sunday  along with street entertainment, food stalls and family fun.

On Saturday and Sunday, at 3pm, local historian John Hough will conduct a guided walk and talk at Reerasta Fort.