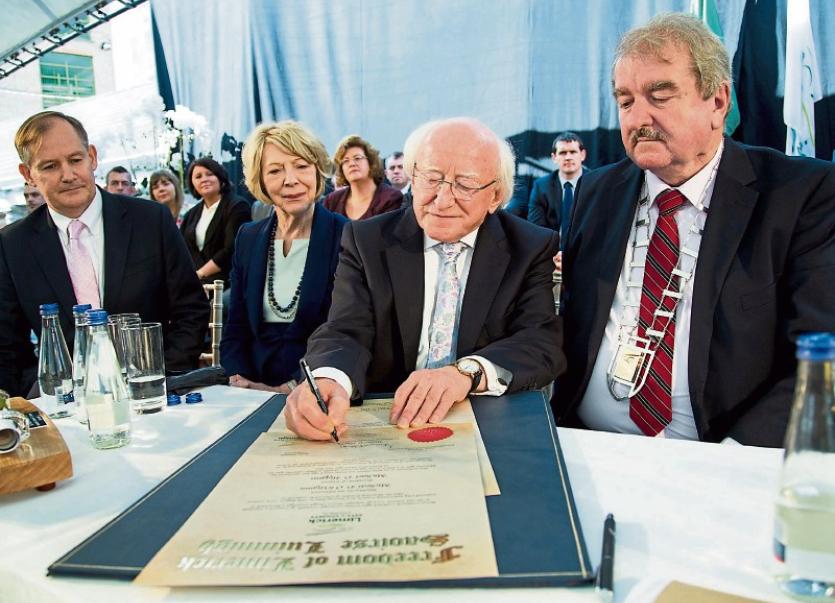 The incumbent President Michael D Higgins receiving the Freedom of Limerick in 2014. He is pictured alongside wife Sabina, the then Mayor, Cllr Kevin Sheahan, and council chief executive Conn Murray

A PLETHORA of presidential candidates will descend on County Hall next Tuesday in a bid to secure a nomination from Limerick’s local authority.

And the council’s seven Independent councillors could play a key role if the main political parties follow the example of their senior Oireachtas colleagues in backing the incumbent President Michael D Higgins.

With 2011 runner-up Sean Gallagher, Pieta House founder Joan Freeman and businessman Gavin Duffy having secured the four councils they need to secure a tilt at Áras an Uachtaráin, a number of other nominees are expected to be in Limerick to try and ensure they get a place on the ballot paper for October 26.

Fine Gael and Fianna Fail’s position nationally is to support the incumbent, as will Labour, given President Higgins was the party’s candidate seven years ago. However, it is understood neither party will impose a whip on local councillors in terms of the nominations.​

Former mayor, Cllr Stephen Keary, said the Fine Gael general secretary had written to candidates asking them to back President Higgins on election day – but stopping short on nomination advice.

Fianna Fail TD Willie O’Dea said: “We may be officially supporting Michael D, but our councilors would appear to be free to nominate whoever they like to go on the ticket. That doesn’t mean they would go out and canvass for them.”

Despite this, it’s understood both parties will meet separately in the coming days to at least agree on a united front for the meeting.​

Sinn Fein, meanwhile, will reveal a candidate this Sunday, with local councillor Séighin Ó Ceallaigh saying it’s unlikely he will nominate somebody else.

“We are in favour of facilitating these meetings. There are some non-politically aligned people who have thrown their hat into the ring, but we will be backing our own candidate. From the bunch that are out there, there doesn’t seem to be any standing out,” he said.

But Fine Gael councillor Jerome Scanlan questioned why the businessman “rode off into the sunset” after the last election and did nothing since.

“If he was seriously concerned about this country, we’d have heard from him in the interim,” the outspoken Feohanagh councillor said.

He also bemoaned the fact neither Fine Gael or Fianna Fail are entering candidates in the election, suggesting his own party should have considered former European Parliament president Pat Cox.

Cllr Scanlan said: “He would have made a great president, particularly in terms of the difficulties and the need for diplomacy around Brexit.”

Councillor Emmett O’Brien said: “It’s a very interesting time to be an Independent councillor. We’d have an unparalleled voice in terms of giving the electorate an opportunity to have a direct say in the election.”

Councillor Richard O’Donoghue, who also sits on the Independent benches, said he believes President Higgins should have stuck to his original promise of a plan to serve just one term.

Solidarity member Cian Prendiville said his own group are unlikely to back anyone.